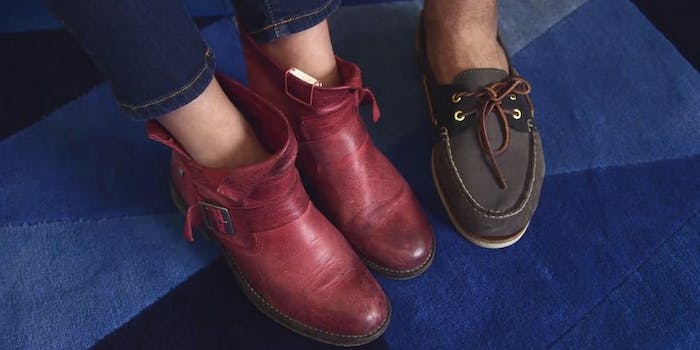 One of the most compelling potential functions for wearables is how they can be used for personal security or law enforcement purposes, like this bracelet that’s intended to prevent assault, or this necklace with a button that triggers a call to the wearer’s cellphone. The D.C.-based firm iStrategyLabs has come up with a device with a similar purpose. It’s called the Dorothy, and it’s a connected device that you slip inside your shoe so you can click your heels three times to call a friend or hail a cab—just like the eponymous heroine of The Wizard of Oz.

As DJ Saul, the managing director of iStrategyLabs, recently told the Daily Dot, the Dorothy consists of an app hooked up to the “Ruby,” a Bluetooth-connected device that you slip inside your shoe. The Ruby is essentially a microcontroller with a built-in accelerometer that’s looking for spikes in data, triggered by the back-and-forth movement of the three heel clicks. (It’s wired to prevent false positives, so you don’t have to worry about accidentally hailing a cab if you, say, happen to have an itch on your ankle.)

After you click your heels three times, the Ruby connects via Bluetooth to the Dorothy app, which will send a phone call or text message to up to three people in your contacts list. The app also gives you the option to share your location with your contacts, or customize your texts to read “Come pick me up” or “SOS.”

The heel-clicking motion might sound like a marketing gimmick, or something straight out of L. Frank Baum’s imagination. But DJ Saul says the “click three times” trigger was developed for a very specific reason: It’s fairly subtle, so if you’re on a bad date or encounter someone shady on the street, no one will know you’re alerting someone else as to your whereabouts.

“If you’re on a date or at a meeting, you could quite literally do this under the table, so no one else would notice,” he explains. “With something like a smart watch, it would be fairly obvious you’re clicking to send a message to someone. But you can click your heels together in a fairly discreet way.”

As of now, the Dorothy is just a “working prototype,” says Saul. “It’s not something you’d necessarily want to put in your shoe.” But the company is working to develop a smaller version of the device that can be clipped on the tongue of your shoes or built into the insoles. The company is also developing the capacity for the Dorothy to hail a cab, so they’re reaching out to Uber (which recently released its API to the public) to see if they’re interested in partnering. (Though given the recent spate of Uber drivers being arrested for passenger assault, this partnership might not actually help the Dorothy’s safety aspect.)

While clicking your heels three times and magically summoning a cab is pretty novel in itself, at its most basic level the Dorothy’s primary function is as a personal safety device, which is what the audience seemed most interested in when iStrategy Labs presented the device at an event called Wearables + Things earlier this week. Saul says that two audience members from the law enforcement sector were particularly interested in the Dorothy, and were wondering how such technology could be deployed for the police force.

But given how versatile this particular technology is, the sky’s the limit for what the Dorothy can do. For instance, Saul says that in the future, he’d like to modify the Dorothy to transmit various customized messages depending on how many times the user clicks his or her heels together. “One click is ‘call my phone’, two clicks is ‘send a message,’ three clicks is ‘order an Uber’, four clicks is ‘order a pizza,’ five clicks is ‘open my garage door,’ and so on and so forth,” he says. Toto, I have a feeling we’re not in Kansas anymore.

H/T The Next Web | Screengrab via iStrategyLabs/Vimeo