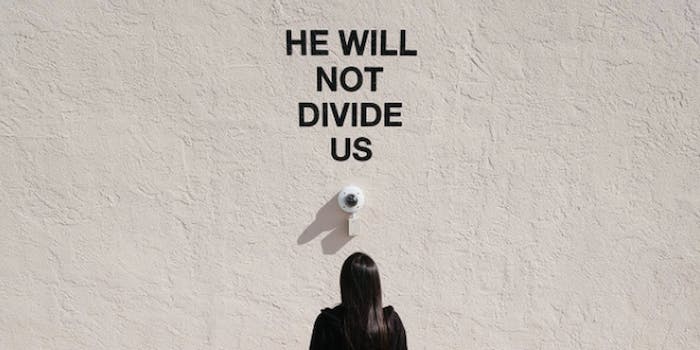 The four-year-long “He Will Not Divide Us” anti-Trump art installation by actor Shia LaBeouf found a new home in Albuquerque, New Mexico.

The controversial installation debuted on Saturday in its new location at the El Rey Theatre, a popular live music and concert venue in downtown Albuquerque. “He Will Not Divide Us”  invites the public to deliver the words “He will not divide us” into a camera for as many times as they wish.

LaBeouf, along with collaborating artists Nastja Säde Rönkkö and Luke Turner, launched the installation at New York’s Museum of the Moving Image on Inauguration Day with the intention of staying there for four years. It lasted less than three weeks. Violent, politically-charged clashes at the installation resulted in police monitoring the location 24 hours a day, seven days a week. A clash between LaBeouf and a man who said “Hitler did nothing wrong” while pretending to take a selfie with LaBeouf ended in the 30-year old actor’s arrest.

The Museum of the Moving Image eventually decided to shut down the exhibit and in a statement deemed it a “flashpoint for violence.”

LaBeouf and his partners addressed both the installation’s move and the reasons behind its abrupt end at its NYC location in a statement over the weekend. The artists blame the Museum of the Moving Image for “bowing down to political pressure.”

“On February 10, 2017, The Museum of the Moving Image abandoned HEWILLNOTDIVIDE.US. Their evident lack of commitment to the project is damning.

From the outset, the museum failed to address our concerns about the misleading framing of our piece as a political rally, rather than as a participatory performance artwork resisting the normalisation of division.

In fact, the museum demonstrated a spectacular lack of judgement—and courtesy to us as artists—by neglecting to consult us when they staged a political rally at the site of our artwork on January 29, 2017.

On numerous occasions, we voiced serious concerns to the museum about hate speech occurring at the site of our project, and requested that the museum act responsibly in moderating this and providing the public a means of reporting such incidents. Our requests were not even acknowledged, let alone acted upon.

Nonetheless, there had been no incidents of physical violence at the site of our project that we are aware of, nor that we had been informed of at any stage by the museum.

It is our understanding that the museum bowed to political pressure in ceasing their involvement with our project. We were only informed of the museum’s capitulation in an email from their attorney, Brendan O’Rourke—a lawyer who we note also represents the current president.

It is clear, therefore, that the Museum of the Moving Image is not fit to speak of our intent as artists.

As of February 18, 2017, we are proud to be continuing HEWILLNOTDIVIDE.US at the El Rey Theater, Albuquerque.”

LaBeouf and an array of artists and supporters tweeted photos and video of the installation’s new launch at its New Mexico location: