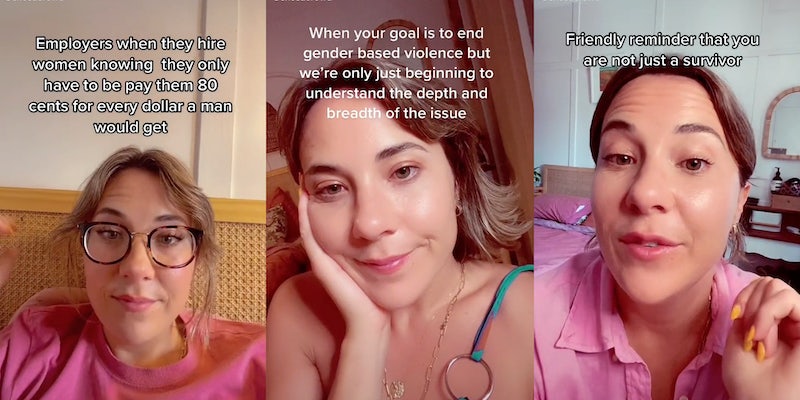 She's A Crowd is leveraging TikTok to build a dataset that will help reduce gender-based violence.

Zoe Condliffe had been working in gender advocacy for a few years when the #MeToo movement blew up. Having survived an abusive relationship herself, the young feminist entrepreneur was fully aware of a fact that often slips people’s minds: across the entire world, gender-based violence is systemically under-reported.

In the U.S., according to the Rape, Abuse & Incest National Network (RAINN), more than two out of three cases of sexual assault are never reported to the authorities. In Australia, where Condliffe is based, only 13% of survivors report their experience to the police.

The reasons why people don’t report their experiences with anything from catcalling and groping to rapes and sexual attacks are manifold, but this lack of data means that decisionmakers lack precious insight on what makes cities unsafe for women. To counter this issue and inform policy on the matter in her native Australia, Condliffe launched her NGO, She’s A Crowd, back in 2018.

Four years later, her efforts are capturing global attention. It’s in no small part thanks to TikTok, where Condliffe and her team have attracted over 85,000 followers who follow the work She’s A Crowd is doing. Jumping on viral audios and memes, Condliffe also shares her expertise on gender issues and claps back against critics who doubt women’s experiences.

“We want to make sure you have an avenue to share your story, and that story is used to address the problem at its root cause,” She’s A Crowd promises.

Their website allows all women-identifying and non-binary people to safely share their experience with gender-based violence. This specific kind of violence includes any harmful act directed at someone based on their gender, from intimate partner violence to sexual assault. According to the United Nations, one in three women globally will experience it throughout their lifetime. Yet, due to a lack of trust in the judicial system, insufficient avenues to voice complaints, fear of retaliation, or the belief that what happened wasn’t important enough to press charges, most stories go unreported and untold.

On She’s A Crowd, survivors are reassured at every step of the way that their story is important and valid, and that it will be kept anonymous if they wish to. Users can submit their experience of gender-based violence by placing a pin on the specific place where something happened to them. Once the pin is placed on a map, they’re asked to provide as many details as they’re comfortable with in a standardized survey.

All answers are optional, and questions range from the date and time when the incident happened to the structural reason why they think it happened, including “not enough staff,” “low visibility,” “limited entrances or exits,” “over-crowding,” and “sexism.” Among the possible types of incidents someone can report are flashing, catcalling, groping, sexist advertising, and being followed. Users are then asked what happened after the experience: the website reassures users that “We all react differently, and there is no ‘right or wrong’ way to respond after an incident,” and it includes reactions like reporting to the police, confronting the perpetrator, changing the way they dressed or the route they took, or not doing anything.

The final part of the survey asks for any further details someone might feel like sharing and for suggestions on how things could be changed to avoid such circumstances in the future.

The data collected from these surveys is then shared with local decision-makers, from urban planners to government officials, to help design cities and policies around the needs of the most vulnerable.

“A perfect example is how transport stations are designed,” Condliffe explains. “A lot of the women who provide us with feedback are asking whether the stations are staffed: they want more people around, more support. They want better lighting, less tunnels, less car parks to walk through. There’s a million little things about infrastructure that make them less safe.”

Historically, she says, personal safety policies have not been informed by gender-disaggregated data that shine a light on gendered experiences of safety.

“Most decision-makers look at customer feedback and logs on incidents that happened on public transport, but they don’t ask what gender the people who report these incidents are,” she adds. “For instance, male-on-male violence happens in public space, but it’s a very different kind of violence compared to what women tend to experience. If a man punches another man, it’s quite obvious it’s going to be caught on CCTV camera, or someone’s going to see it and there could be a physical assault charge. If a woman is followed off a train and followed home, most people won’t notice. If a train is busy, someone slides up next to you and touches you, which happens a lot, most people won’t notice.”

Over the past five years, more and more activists and scholars in the feminist space have started underlining the importance of collecting granular, gender-disaggregated data in order to build a more equitable world.

Caroline Criado-Perez’s best-selling book Invisible Women, for instance, lists dozens of case studies on how everything, from smartphones to cities, is being designed taking male bodies as the standard for the whole of humanity. For example, women are 17% more likely to die in car crashes than men because the passenger seat is the only seat that is commonly tested with a female crash-test dummy, while the standard dummies used to test driver’s seat are usually only male. Meanwhile, female pianists are 50% more likely to suffer hand injuries, because keyboards are designed for the average male handspan.

She’s A Crowd operates from the same assumption, collecting high-quality data that can be provided to legislators to show how endemic gender-based violence is and design policies to tackle it.

“We’re at such an early stage in the journey, there’s so much work to be done,” Condliffe says. “We hope to provide datasets to make evidence-based decisions for campaigns, be they for bystander awareness or intervention, male behavior change, or infrastructure and design changes.”

They currently work with several Australian authorities, including the government of Victoria and several Departments of Transport throughout the country. The data they collected, though, is global, in no small part thanks to TikTok.

“I was initially hesitant to get on TikTok, but I now think it’s a really powerful platform, if you use it right,” Condliffe says. “It has allowed me to share my story, to connect with the followers and with the people who love what we do. And it’s allowed us to reconnect with our purpose, because it’s such a feedback-based platform. You can really tell what people relate to.”

From a personal point of view, she says “as a survivor myself, I noticed that when I started to share my own personal story, it made me feel in control of the narrative, and it helped me overcome a lot of the shame that is associated with this kind of experience. I wanted to expand the experience of sharing their experience to other survivors—to make them feel the sense of relief of knowing their story is being counted, and that they’re part of something that is bigger than themselves.”

In early January, Condliffe shared a video joking about the fact that, on a random day in December alone, 10,000 people shared their stories on She’s A Crowd thanks to her videos going viral on TikTok. The platform has now collected 80,000 reports from all over the world—pushing the NGO to consider expanding beyond Australia.

“We’re building technologies that will allow us to scale, but we’re a startup, so we have build something small and test it before we can expand,” she explained.

But if its TikTok keep blowing up, it shows there is a serious need for what She’s A Crowd provides.