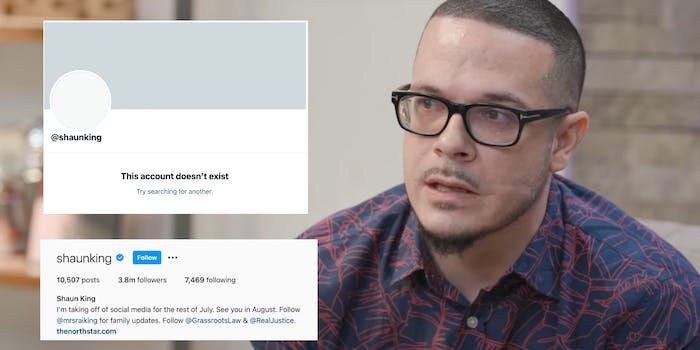 ‘Is grifting season finally over?’

Shaun King, who rose to fame for pursuing justice on behalf of Black Americans, deleted his Twitter account over the weekend. He also made his Instagram private—noting there that he’s taking a social media break “for the rest of July.”

Some people previously speculated that he may have been suspended by Twitter, but a spokesperson for the app confirmed to the Daily Dot that King deactivated himself. Now, it appears we know why.

King has long been the subject of controversy. He’s earned a reputation as a grifter by some families of people killed by police and has been accused of pocketing money supposedly raised for the Black Lives Matter movement.

Just last month, Samaria Rice, the mother of Tamir Rice, called King an “imposter that can not be trusted.” The comment came after King published details of a private conversation between the two.

Plus, King has faced heat for launching and fundraising for projects that were abruptly shut down before completion. In 2011, he raised thousands of dollars to reportedly climb seven mountains; the trip was abandoned just four days into his training. Two years later, he charged people nearly $50 to teach them how to plan their lives. But various reports show he did not follow through with his commitments.

On top of this, he’s faced allegations that he’s misrepresenting his race (King claims to be biracial) or passed as a Black man when he’s actually white.

Because of all this, many users rejoiced at his leaving the social media apps.

“Y’all do not let Jeffrey Shaun King fool you. He is going to come back bigger, badder, and whiter than ever,” user @DrVirgo1981 tweeted. “And with a new grift to boot.”