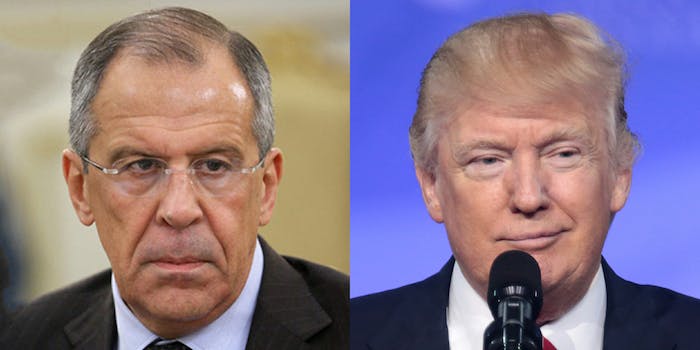 Top Russian diplomat jokes about Comey ahead of Trump meeting

The high-level meeting could mark the beginning of a turnaround in diplomatic relations between the U.S. and Russia, which have been strained since Trump ordered U.S. military airstrikes against Moscow-backed Syrian regime of President Bashar al-Assad and accused Russia’s ally of carrying out a devastating chemical weapons attack against civilians.

Members of Congress from both parties have questioned the reason for Comey’s sudden firing. Although the White House claimed that Comey was fired over his handling of the 2016 investigation into Hillary Clinton‘s use of a private email setup for sensitive government business, some suspect that the move was designed to disrupt the FBI’s ongoing investigation into Russian interference in last year’s presidential election.

Lavrov is familiar with the Russian hacking and meddling line, having denied his government’s involvement in trying to influence the outcome of the election in favor of Trump.

“It’s flattering, of course, to get this kind of attention—for a regional power, as President Obama called us some time ago,” Lavrov said, with trademark sarcasm, to CNN in October.

“Now everybody in the United States is saying that it is Russia which is running the [U.S.] presidential debate. We have not seen a single fact, a single proof.”

The intelligence community, however, disagreed and at the time, on the basis of their assessment, the Obama administration publicly accused the foreign power of seeking to manipulate the democratic process.

Still, none of this seems to phase Lavrov, who cracked some deadpan humor over Comey’s departure as he arrived alongside U.S. counterpart Secretary of State Rex Tillerson.

“Was he fired? You are kidding!?” he shrugged in reply to a reporter’s question on whether the FBI director’s departure “casts a shadow” on the visit.

WATCH: "Was he fired? You are kidding!?" Russian FM Lavrov scoffs when asked by @mitchellreports about effect of Comey's firing on DC mtgs. pic.twitter.com/SCFJzGsYQZ

Trump is set to meet Russian President Vladimir Putin in person this July, at the G20 summit.