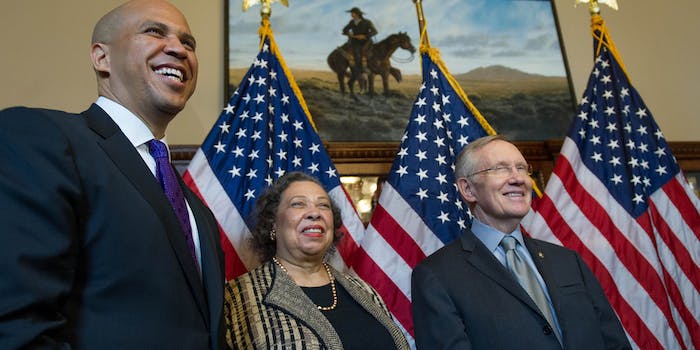 Sen. Cory Booker aims to take an Instagram selfie with every senator

Sen. Cory Booker, the Internet’s favorite politician, is bridging party lines in his signature modern way: He is setting out to take selfies with all 99 of his fellow Senators.

Booker, who was chosen to represent New Jersey in a special election following the death of Sen. Frank Lautenberg, is a Democrat. However, the former Newark mayor hasn’t let his party affiliation keep him from friendly Instagram photo ops with his fellow senators. In fact, the Washington Post points out, he captions each photograph with a positive description of his professional peer, highlighting the issues on which they are in agreement.

So far, Booker has achieved 11 of the 99 photos. He has yet to land selfies with such Senate bigwigs as Sens. Al Franken, Elizabeth Warren, or Ted Cruz.

Booker’s selfie campaign is his latest in a long line of social media-powered political efforts. In November 2013, as mayor of Newark, he took to Twitter and petitioned Nestle to have Hot Pockets delivered to Newark residents displaced by Hurricane Sandy. He also paused his Senate campaign to rescue a dog earlier that year, which the Internet of course loved.

This time around, Booker is sending the message that, despite continued, well-publicized headbutting, the Democratic and Republican parties can indeed be unified, if only on Instagram.