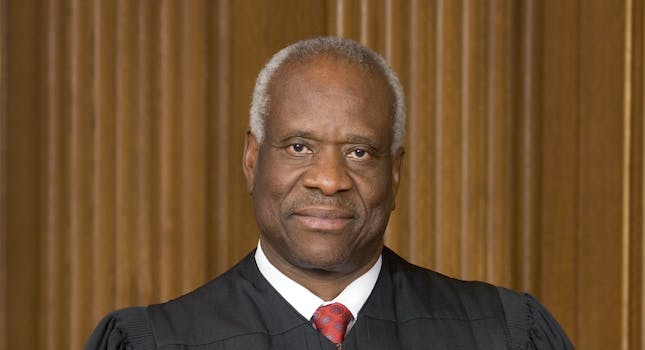 It's a huge shot at a major provision.

Yesterday, the Supreme Court decided not to hear a case against Facebook by a Jane Doe, who sued the social media giant after she was lured by a person on the platform into a meeting, then trafficked for sex.

But in the denial, Justice Clarence Thomas called for changes to some of the bedrock principles of the internet.

Doe sued Facebook, saying that the platform had violated anti-trafficking laws in the state of Texas. And while some of her case against Facebook was allowed to proceed, the Texas Supreme Court ruled that Doe’s “common law” claims were barred because Section 230 of the Communications Decency Act protected Facebook from liability.

Section 230 is a foundational law of the internet, which holds that most tech companies cannot be held responsible for what users post on the platform.

Over the past several years, conservatives have taken aim at Section 230, believing that platforms, in choosing to moderate content (and specifically conservative content) act more as traditional publishers and those could and should be held liable for their actions.

Without the protections of Section 230, numerous companies could be open to litigation. While it’s not known what would happen if Section 230 was repealed, it’s safe to say the way that social media works currently could drastically change.

Thomas, in the denial, believed the case was correct to be dismissed. However, he said the Supreme Court should take up a more appropriate case that allows the Court to make a ruling on 230. He made it clear that immunity is the issue.

“The Texas Supreme Court acknowledged that it is ‘plausible’ to read more narrowly to immunize internet platforms
when plaintiffs seek to hold them ‘strictly liable’ for transmitting third-party content, but the court ultimately felt compelled to adopt the consensus approach, This decision exemplifies how courts have interpreted §230 ‘to confer sweeping immunity on some of the largest companies in the world,'” Thomas wrote.

“We should, however, address the proper scope of immunity under §230 in an appropriate case,” the justice added, saying that the current interpretation of the law was wrong.

“As I have explained, the arguments in favor of broad immunity under §230 rest largely on ‘policy and purpose,’ not on the statute’s plain text.”

With bills in Congress targeting it, as well as a concerted effort against the statute by former President Donald Trump against the tech giants over his various bans, Section 230 remains in a perilous position, despite its importance.