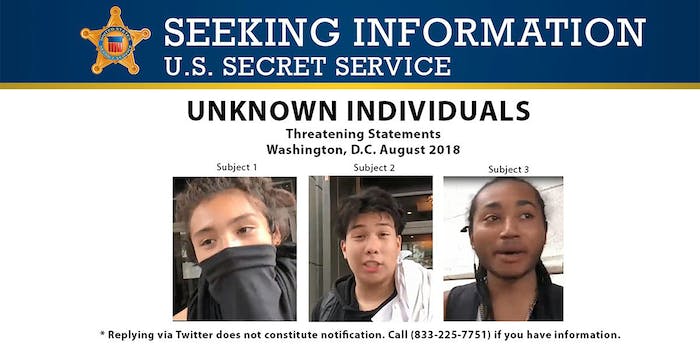 The Secret Service is asking questions about a far-right video.

The Secret Service is using a right-wing video to identify and pursue antifa protesters over comments they made about President Donald Trump at a neo-Nazi rally in Washington, D.C.

Secret Service seeking assistance to identify these unknown individuals believed to have made threatening statements in Washington D.C. on Aug. 12, 2018. For more information or to make a report: https://t.co/eTxEtnzdhz pic.twitter.com/rUsKOzR2ub

Secret Service seeking assistance to identify this unknown individual believed to have made threatening statements in Washington D.C. on August 12, 2018. For more information or to make a report: https://t.co/Z2cdMBwnit pic.twitter.com/DmSVJDbONa

The video was shot during the Unite the Right anniversary march in Washington D.C. on Aug 12. Despite a permit for 400 attendees, a mere 20 supporters turned up for the white supremacist event. They were vastly outnumbered by the hundreds of counter-demonstrators who organized.

Johnson took the opportunity to interview several counter-demonstrators, asking them just one question: What they would do if Trump attended the far right-march?

The first individual of interest is a masked man identified as Subject 1 by the Secret Service.

“If I get a chance to fuck him up I would, yeah,” he said when asked the question by Johnson.

Johnson then laughs, drawing attention to what appears to be a knife tucked into the man’s pants.

It’s then he asks Subject 2, unmasked and standing next to Subject 1, what he would do.

Johnson then turns to the third man standing nearby, Subject 3: “How about you sir?”

“I’d smack him to,” Subject 3 responds smiling and gesturing, “but it’d be like a pimp slap.”

Only one of the four makes a more direct threat.

“If it came down to it and it was a group effort we’d have to do him like Gaddafi,” Subject 4 tells Johnson in a separate clip, comparing Trump to the Libyan dictator killed by rebels.

The answers were then edited and featured in an article on the Daily Caller.

Protesters armed with knives.
Threatening to "murder" Trump and "do him like Gaddafi."

This is what I observed at the "peaceful" counter-protest yesterday

Now, however, the Secret Service wants to speak to those who appeared in the video and it appears that they aim to use it as evidence.

Although the Secret Service did not issue its public appeal for information until Aug. 22, Johnson was able to report, just two hours after his video was originally published on Aug. 13, that the agency was “aware” of the threats.

And it raises the question: Did the Daily Caller send its antifa scoop to the Secret Service?

The Daily Dot has contacted the Secret Service to find out more about its use of the video to investigate individuals.