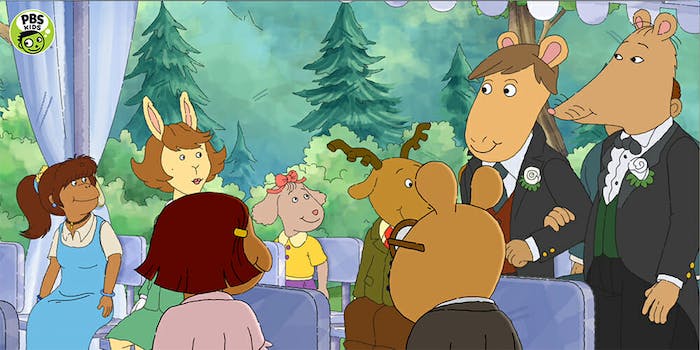 Mr. Ratburn from ‘Arthur’ is gay—and Twitter is thrilled

The cake-loving teacher gets married in a new episode.

Remember cake-loving teacher Mr. Ratburn from the PBS Kids show Arthur? Well, he just got married to a man—and people on Twitter are absolutely elated.

TVLine reports that the plot twist came in the season 22 premiere of Arthur, “Mr. Ratburn and the Special Someone,” which aired on Monday.

In the episode, Arthur and his friends plan to foil Mr. Ratburn’s wedding to a woman they see him with, fearing they’re not a great match. But the gang soon figures out that the woman (voiced by Jane Lynch) is actually Mr. Ratburn’s sister, and his betrothed is a man who makes Mr. Ratburn very happy.

It made people on Twitter very happy, too, when they learned that the beloved Arthur character finally came out as gay.

For some, there were clues along the way, like the poster that showed a young Mr. Ratburn in a new wave band.

But it was still exciting news for many who grew up watching the show, which mostly centers around Arthur, his sister D.W., and their friends as they navigate the challenges of elementary schoolers.

gay people who grew up with Arthur: haha mr. ratburn is gay

“Now that Mr. Ratburn is gay I can finally die,” one Twitter user wrote.

Now that Mr. Ratburn is gay I can finally die

me thinking about how mr. ratburn from arthur is canonically gay and got married to another man on television today pic.twitter.com/nCPihYuE7U

In a statement to the Daily Dot, PBS Kids said its programming is “designed to reflect the diversity of communities across the nation.”

“We believe it is important to represent the wide array of adults in the lives of children who look to PBS Kids every day,” said a spokesperson for the network.