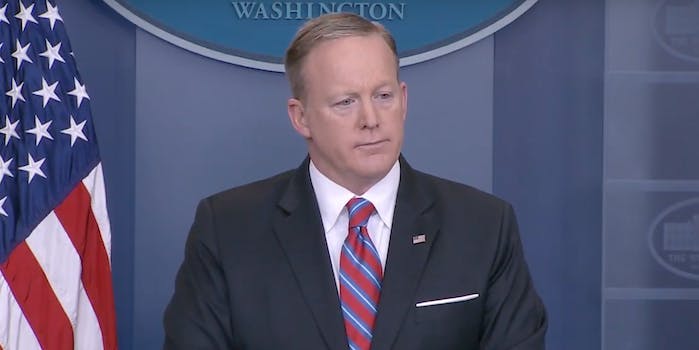 It's called 'The Briefing.'

Of all the people who have flamed out while serving President Donald Trump—Anthony Scaramucci, Rex Tillerson, Steve Bannon, Oma-fricking-rosa—no one did it quite so publicly and with the same lack of panache as Sean Spicer.

The former RNC official was thrust into the national conversation on day one, when, as Trump’s press secretary, he was forced to defend the president’s inauguration crowds. And he never recovered. Every televised briefing after was a spectacle rich with gaffes, flubs, and light Holocaust denial.

It was something, and now he’s got a new book.

It’s called … wait for it, you are never gonna guess:

Here it is! The cover of my upcoming book #TheBriefing is out. Pre-order and signed copies available Info at https://t.co/wb9tr2UAjN pic.twitter.com/UnVoNGbGZ1

The briefing! You know, the thing he was hilariously, wildly, outstandingly inept at.

Maybe not the greatest choice for a title—and Twitter came for it as swiftly as it came out.

The book should just say "I am really sorry for lying so much" over and over again. https://t.co/6tzm629FBa

I had to take a long look, I thought this was a joke. He is serious. Who wants the “autographed copy?” https://t.co/NeQR06fqQT

Wouldn’t “Briefly” be a better title for a book about your time in the WH? https://t.co/lqnM6hk0Jr

In the adult fiction section, one assumes https://t.co/heVSyLm0HI

Like most people who have departed the administration, Spicer has been extremely uncritical of the president, so don’t expect a juicy, James Comey-style tell all.