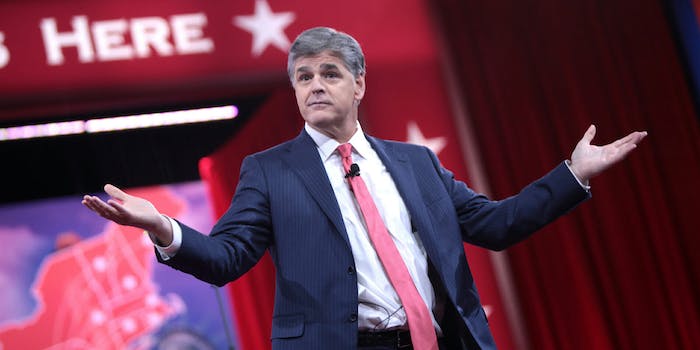 He tweeted that he wouldn't be campaigning with Trump.

It’s no secret that Fox News host Sean Hannity and President Donald Trump have an affinity for one another, but the conservative pundit took his support a step further on Monday night when he appeared on stage with him at a rally ahead of tonight’s midterm elections.

The appearance on stage from Hannity came just hours after he insisted that he would not be campaigning with Trump in Missouri.

“In spite of reports, I will be doing a live show from Cape Girardeau and interviewing President Trump before the rally,” the Fox News host tweeted on Monday. “To be clear, I will not be on stage campaigning with the President. I am covering final rally for my show. Something I have done in every election in the past.”

The host interviewed the president live before being called on stage.

During his appearance on stage Hannity blasted the media and hugged Trump, according to the Associated Press. He also repeated the president’s “promises made, promises kept” campaign slogan.

“The one thing that has made and defined your presidency more than anything else, ‘promises made, promises kept,'” Hannity said.

Hannity takes the stage at Trump rally. Opens up by pointing to the press area and says, "By the way, all the people back there are fake news." pic.twitter.com/RS8DcF6SYb

Numerous people online brought up their thoughts about Hannity taking the stage with Trump.

Watching Hannity and Judge Jeanine gushing about the Trump rally (“it’s like a rock concert!”) — there is nothing to distinguish this from a paid political ad, nothing. Except it might have better production values.

Sean Hannity, who is definitely not campaigning for Donald Trump, is listing Trump's accomplishments to his 3+ million viewers and repeating one of his campaign slogans ("Promises Made, Promises Kept") over and over again. "

So if you campaign with Trump – like Hannity did tonight – and then have Trump on your show, is that an in-kind contribution?

Sean Hannity is not a journalist.
FoxNews is a supersized PR firm for Trump. https://t.co/UYLOA1MdWn

Hannity, after making that false declaration about himself during the day, called the media “fake news” in his speech.