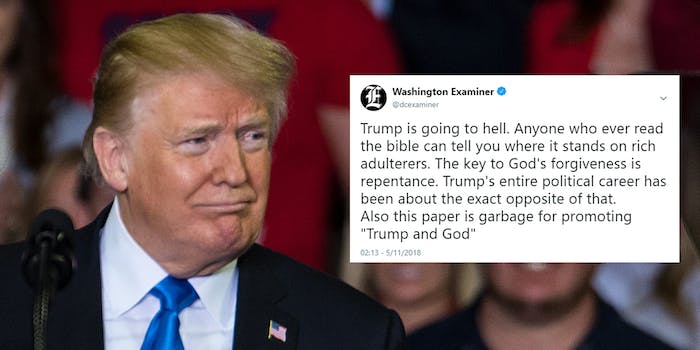 The Washington Examiner is a prominent conservative newspaper in D.C., one that’s considered somewhat of a ballast to the more liberal Washington Post.

But Monday on Twitter, it took a brazenly anti-Trump stance, declaring that Trump is “going to hell” for his adulterous ways.

“Trump is going to hell,” the post proclaimed. “Anyone who ever read the bible can tell you where it stands on rich adulterers. The key to God’s forgiveness is repentance. Trump’s entire political career has been about the exact opposite of that. Also this paper is garbage for promoting ‘Trump and God.’”

The Washington Examiner swiftly deleted the tweet, saying it was hacked, and that the missive did not come from any of its staff.

The Washington Examiner’s Twitter feed was hacked and a tweet was posted that did not come from our staff. We are taking appropriate action and will issue a further statement if necessary.

However, something of that magnitude, coming from a national news organization was sure to incite the internet, regardless of whether it was a hack, social media screw up, or Freudian slip.

Trump has, on occasion, praised the Washington Examiner for its coverage of him.

Thank you to the Washington Examiner and @CortesSteve on the great article – on WINNING! https://t.co/b5dfUABN5q

The president has not yet responded to this deleted tweet.