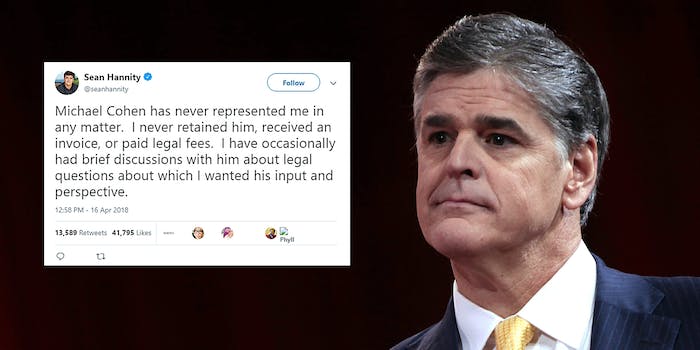 The news stirred controversy at the time given that Hannity’s coverage of Cohen—which often painted the long-time attorney as a victim of a “corrupt” Mueller investigation—failed to mention the connection.

According to HillReporter.com, Hannity has now deleted upwards of 280 tweets, five of which were related to Cohen.

Several of Hannity’s remarks were saved by an automated Twitter account that screenshots tweets as they are being deleted.

One such tweet was Hannity’s denial in April that he was ever a client of Cohen.

Hannity also deleted a spree of tweets from a feud he had with Jimmy Kimmel, where he branded the talk show host “Harvey Weinstein Jr.”

The Fox News host has thus far failed to comment on the sudden purge of his tweets.

Update 5:28pm CT, Dec. 12: Hannity still has several Cohen-related tweets on his timeline, mostly about times Cohen was on Hannity’s show, and some about Cohen’s response to the infamous BuzzFeed dossier.