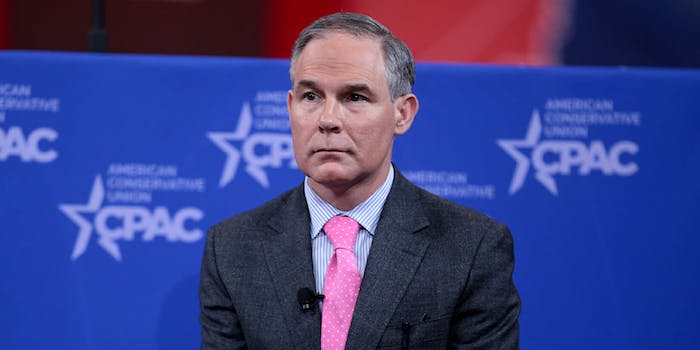 170 lawmakers call on Scott Pruitt to resign from the EPA

EPA Administrator Scott Pruitt is facing pressure from 170 members of Congress to resign.

The group of lawmakers, comprised of 131 representatives and 39 senators, signed a resolution that says they have “no confidence in the Administrator of the Environmental Protection Agency” and calls for Pruitt’s “immediate resignation,” according to the Hill.

The resolution says Pruitt “misused taxpayer dollars” for “personal conveniences and unnecessary office enhancements,” and the EPA is “hemorrhaging staff and experts,” among other things.

“Administrator Pruitt has lost the faith of the public through his continued undermining of basic ethics, particularly the ethics of impartiality … and is tarnishing the reputation of serving in public office at the agency,” the resolution reads.

All of the lawmakers who signed the resolution are Democrats, according to Talking Points Memo, and it has the largest number of senators ever to sign a resolution calling for the resignation of a cabinet official, the New York Times reports.

Earlier this month Pruitt was subject to rumors of being ousted from President Donald Trump‘s administration amid numerous controversies popping up—including renting a condo in Washington D.C. linked to an energy lobbying firm, giving raises to aides after being denied by the White House, and the Government Accountability Office finding that the EPA’s purchase of a phone booth for Pruitt broke the law.

The EPA administrator has also faced criticism for spending more than $100,000 on first-class flights.

However, Trump has thrown his support behind the administrator, tweeting earlier this month that Pruitt was doing a “great job.”

In the wake of the reports, White House budget director Mick Mulvaney has promised to investigate Pruitt’s spending.