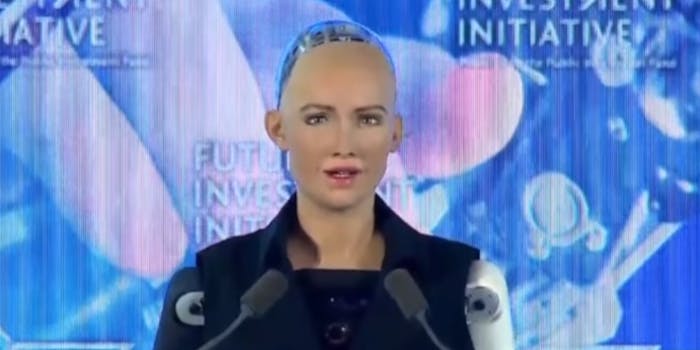 The same robot that wanted to 'destroy humans.'

Saudi Arabia gave a robot that once said it wanted to “destroy humans” more rights than its own citizens.

The humanoid named Sophia became the first robot in history to be granted citizenship at the Future Investment Initiative in Riyadh on Oct. 25. The decision sparked a backlash, with people furious that a female robot achieved more rights than millions of women and refugees in Saudi Arabia.

"It is historical to be the first robot in the world to be recognized with citizenship." Please welcome the newest Saudi: Sophia. #FII2017 pic.twitter.com/bsv5LmKwlf

Many pointed out that Sophia was presented at the conference not wearing the traditional dress required of Saudi women. No hijab. No abaya. The Hanson Robotics-made humanoid was also not accompanied in public by a man. According to Saudi law, women are required to have a male guardian—a father, brother, husband, or even son—who make decisions on their behalf.

Some of the things women aren’t able to do by themselves include apply for a passport, travel outside the country, study abroad, get married, or exit prison.

You're telling me, Saudi freaking Arabia, the country that has probably the worst human rights on the planet, made a robot a citizen? FFS

How the HELL can a robot have citizenship and people don't have it? https://t.co/wQVQ1v1PbC

Sofia honey you have no idea what's waiting for you
#صوفيا_تطالب_باسقاط_الولايه pic.twitter.com/slbLXgRCkX

Others, including actress Rosario Dawson, noted the robot was granted citizenship when refugees around the world are being turned down. Saudi Arabia has been strongly criticized over the past few years for failing to help refugees fleeing Syria. Amnesty International claimed in a 2014 report that the Gulf countries—Qatar, United Arab Emirates, Saudi Arabia, Kuwait, and Bahrain—offered zero resettlement places to Syrian refugees.

Just icymi… this robot has citizenship and people are still calling other humans illegal… https://t.co/WJdTTeOhEG

Saudi Arabia’s newly appointed 32-year-old Crown Prince Mohammed bin Salman vowed on Tuesday at the conference to return to a moderate Islam and “obliterate the remnants of extremism very soon.” Last month, Saudi Arabia announced it would allow women to drive, abolishing a longstanding rule and symbol of the country’s repression.