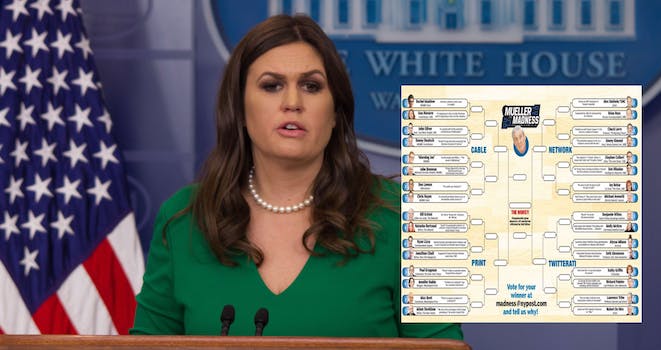 Mueller Madness! Which of the angry and hysterical @realDonaldTrump haters got it most embarrassingly wrong? #YouDecide pic.twitter.com/IkzUesDdub

In the summary of the report delivered to Congress, Barr said that Mueller could not prove collusion with the Russian government in the 2016 election, but that the report “did not exonerate” Trump.

The bracket Sanders shared was originally produced by the New York Post and includes some of the biggest hypers of the Trump-Russia collusion conspiracy over the past couple of years, broken down into four regions: Print, Twitterati, Network, and Cable.

The people you’d expect to see on there are all represented. There’s Rachel Maddow, Seth Abramson, Jonathaan Chait, and Stephen Colbert, with a list of some of their more egregious claims.

Of course, people were upset online at Sanders for directly going after the press like this.

How is this an acceptable thing for the White House press secretary to tweet out about members of the press and ordinary American citizens? https://t.co/wVDL923kMf

you are a hack and an embarrassment to the office and anyone who's ever held the position. https://t.co/nF5xBkAOPu

This is an official government account and salary paid for by American taxpayers. https://t.co/vp5123umDP

The US conservative movement is now dominated by trolls and shitposters, from top to bottom. https://t.co/qwCzoeI5WY

However, the list is also notable for snubbing perhaps the biggest Trump-Russia conspiracy theorist, Louise Mensch, who boldly tweeted that Trump’s former campaign head and senior strategist would get the death penalty over his ties to Russia.

Regardless, the White House and the Trump campaign are going all out against the media for their role in perpetuating the collusion theory—which hasn’t been entirely disproven and has led to numerous revelations about the president and his businesses. Just yesterday, Trump’s campaign sent networks a list of Democratic congresspeople who should not receive airtime for their “false” claims about Trump and Russia.