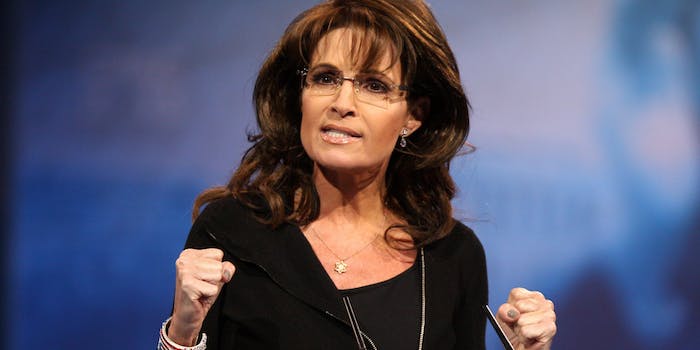 Sarah Palin can laugh at herself.

Former Alaska Gov. Sarah Palin never actually said the words, “I can see Russia from my house,” but she’s still not afraid to use the infamous phrase to poke fun at herself.

With U.S. intelligence agencies blaming Russia for interfering with the election with the intent of helping Donald Trump win the presidency, Palin dropped this nugget on Twitter.

Russia's getting out of hand? So says the defeated. Not to worry… remember I can keep an eye on them from here. https://t.co/jQBCDV5O3W

The world remembers Palin’s claims of proximity to Russia because of Tina Fey’s portrayal of Palin on a 2008 episode of Saturday Night Live. What Palin really said when interviewed by ABC was, “You can actually see Russia from land here in Alaska.”

But Fey’s words are already written into the history books under Palin’s name, and there’s not much anybody can do about it. So, Palin on Sunday decided to have a little fun.

No matter what you think of her politics, score one for Palin and the power of self-deprecating humor. With all the tumult in the U.S. at the moment, it’s exactly what we need.