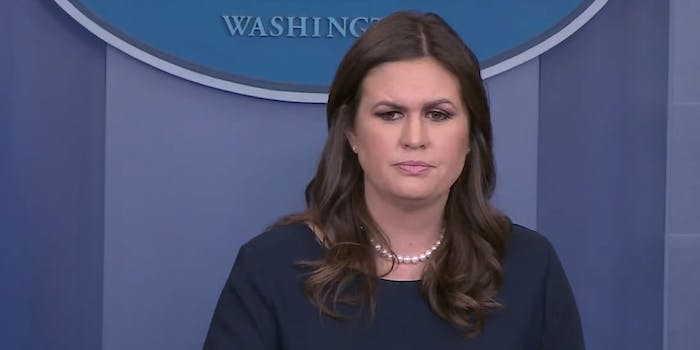 People couldn't figure out how Mike Pence was in the photo.

When she sent out the tweet on Saturday, her caption above the image―which boasted that Trump proved he was willing to enforce a “red line” regarding the use of chemical weapons―led many to believe she was claiming the image was taken during the strike, which took place on Friday night.

Last night the President put our adversaries on notice: when he draws a red line he enforces it. (Inside the Situation Room as President is briefed on Syria – Official WH photos by Shealah Craighead) pic.twitter.com/GzOSejdqQh

On Sunday, however, she explained that the photo was taken during a briefing on Syria that was held on Thursday night, and she’s denied there was anything misleading about the tweet. People initially concluded that the photo couldn’t have been taken on Friday, because of Pence’s presence in it; he was abroad in Peru when the strikes were taking place.

As I said, the President put our adversaries on notice that he enforces red lines with the strike on Syria Friday night. The photo was taken Thursday in the Situation Room during Syria briefing.

In addition to her tweet clarifying the date of the photo, she told Politico by email that there was nothing misleading about her initial tweet.

“It’s from Thursday meeting when he was briefed on Syria,” she said. “So no, not misleading at all.”

Throughout her tenure as White House press secretary, Sanders has been a frequent target of criticism, owing to the numerous misleading statements she’s made since taking the job.