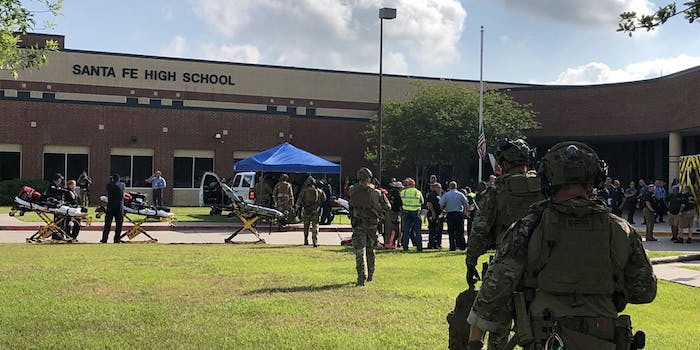 A suspect is now in custody.

A shooting at a high school in Texas has left 1o dead, according to multiple reports.

Santa Fe High School, in the southeastern part of the state, was put on lockdown this morning after an active shooter was reported. Police have said that a suspect, Dimitrios Pagourtzis, is in custody.

Pagourtzis is 17, and a student at Santa Fe High School.

Ten people are confirmed dead, according to officials. At least three injured being treated at local hospitals, according to CNN.

The shooting occurred at 7:45am local time, and according to some witnesses began in an art class. The shooter was reportedly armed with a shotgun and a student at the high school, law enforcement officials said.

#BREAKING: A confirmed active shooter at Santa Fe High School just South of Houston, Texas. Life flight has been called out. One witness said the shooting started in an art class around 7:45am.

#BREAKING: Law enforcement officials at high school say shooter appears to be a student of the school.

Santa Fe High School is 35 miles south of Houston, and has approximately 1,400 students.

Update 12:10pm CT, May 18: Explosive devices were found at the school and in surrounding areas, said Chief Walter Braun of Santa Fe Independent School District Police. He told the community to call authorities if they found anything suspicious, but did not elaborate beyond that.

#UPDATE There have been explosive devices found in the high school and surrounding areas adjacent to the high school. Because of the threat of explosive items, community members should be on the look-out for suspicious packages and anything that looks out of place.

The suspect is also confirmed to be a 17-year-old student. According to witnesses and law enforcement, he was wearing a trenchcoat when he entered a classroom and fired several shots, according to NBC News. As many as 10 could be dead, police said.