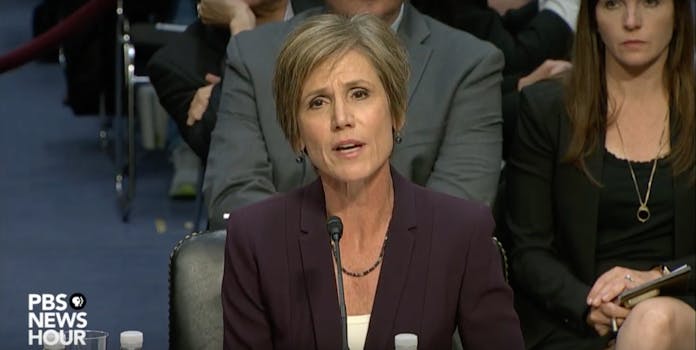 'To state the obvious, you don’t want your national security adviser compromised with the Russians.'

Sally Yates, the former acting attorney general of the United States, told a Senate panel on Monday that she warned the Trump administration former National Security Adviser Michael Flynn could have been “blackmailed” by Russia’s government.

Speaking before the Senate Judiciary Subcommittee, Yates detailed her reason for informing the White House that Flynn had misled Vice President Mike Pence regarding the nature of his conversations with Russian Ambassador Sergey Kislyak, saying Flynn was “compromised” by Russia.

The Trump administration forced Flynn to resign on Feb. 13, hours after the Washington Post revealed that Yates had informed the White House that Flynn lied to Pence about discussing U.S. sanctions on Russia with Kislyak. The Post first revealed Flynn’s discussions with Kislyak in a Jan. 12 column. Pence appeared on CBS’s Face the Nation to defend Flynn, saying the national security adviser had done nothing wrong.

According to Yates, however, both U.S. intelligence and Russia’s government knew Pence was repeating false claims he said Flynn had made to him.

Yates said that “created a compromise situation … where the national security adviser essentially could be blackmailed by the Russians.”

“We felt like it was critical that we get this information to the White House because, in part, the vice president was unknowingly making false statements to the public and because we believed that General Flynn was compromised with respect to the Russians,” Yates said.

Yates added: “To state the obvious, you don’t want your national security adviser compromised with the Russians.”

Yates says she informed White House Counsel Don McGhan and other officials about Flynn’s contacts with Kislyak, first on Jan. 26 and twice more on Jan. 27 and Jan. 30.

President Donald Trump fired Yates on Jan. 30 after she refused to enforce the president’s executive order banning travelers from seven Muslim-majority nations on the grounds that it was likely unconstitutional.

Ahead of Yates’ testimony, Trump took a swipe at the former Department of Justice official, calling on lawmakers to ask her under oath whether she had leaked information to the media. Multiple lawmakers did just that. Both Yates and former Director of National Intelligence James Clapper, who testified alongside Yates, repeatedly denied leaking classified information to reporters.