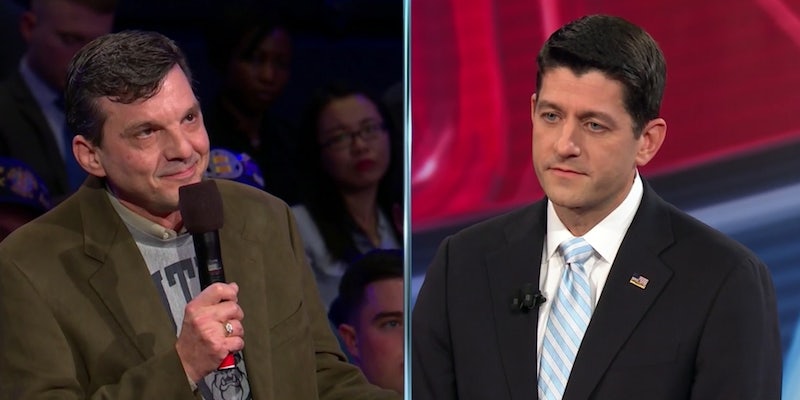 House Speaker Paul Ryan (R-Wisc.) was confronted at a CNN town hall event by a cancer survivor on Thursday night over his attempts to repeal Obamacare.

A self-described lifelong Republican and former Ronald Reagan campaign worker, Jeff Jones told Ryan, “Just like you, I was opposed to the Affordable Care Act. When it was passed, I told my wife we would close our business before I complied with this law.”

But Jones went on to explain to Ryan how his world shattered when doctors told him that he had just six weeks to live unless he received treatment that would require health insurance that he did not have as a business owner.

“I rely on the Affordable Care Act to be able to purchase my own insurance,” Jones said. Without Obamacare, Jones, with such a severe diagnosis, would have had problems finding a policy that would afford him the medical treatment he desperately and urgently needed.

The question addressed the late-night voting session in the early hours of Thursday morning that put forward a budget plan for 2017. That budget plan cannot contain policy itself, but was designed to instruct committees to repeal the Affordable Care Act, also known as Obamacare. Repeal of Obamacare without an adequate replacement could result in some 30 million Americans losing their health insurance.

Ryan attempted to answer with a vague response about the Republican plan to replace Obamacare with another system.

“Can I just say one thing?” Jones interrupted him. “I want to thank President Obama from the bottom of my heart because I would be dead if it weren’t for him.”