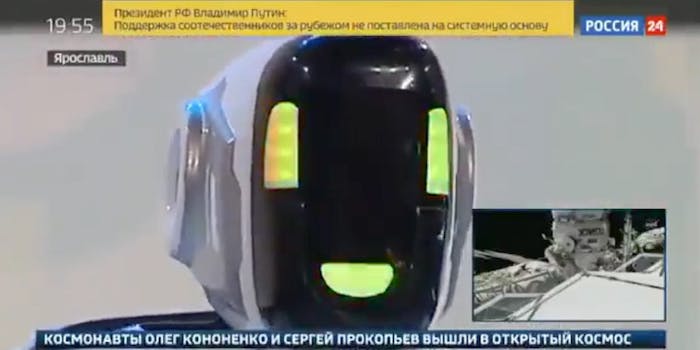 No wonder his dance moves are so fancy.

Russian state television praised the technical prowess of a “robot” this week that turned out to be nothing more than a man in a costume, the Guardian reports.

During a segment Tuesday on Russia 24, a newscaster praised the alleged automaton, known as Boris, for its seemingly-sophisticated dance moves during an appearance at a technology forum for children.

“It’s entirely possible one of these [students] could dedicate himself to robotics,” an anchor said. “Especially as at the forum they have the opportunity to look at the most modern robots.”

A Russian blog, however, was quick to call into question the legitimacy of the so-called robot.

One image of Boris posted to Twitter revealed a human neck clearly visible under the suit.

According to the Guardian, Boris, whose true name is “Alyosha the Robot,” is merely a costume developed by a company known as Show Robots.

“The £3,000 costume, equipped with microphone and tablet display, creates the ‘near total illusion that before you stands a real robot,'” the Guardian states.

Reports indicate that the forum is not believed to have attempted to pass the robot off as real. It is also unclear whether Russia 24’s anchors were aware that Boris was actually human.