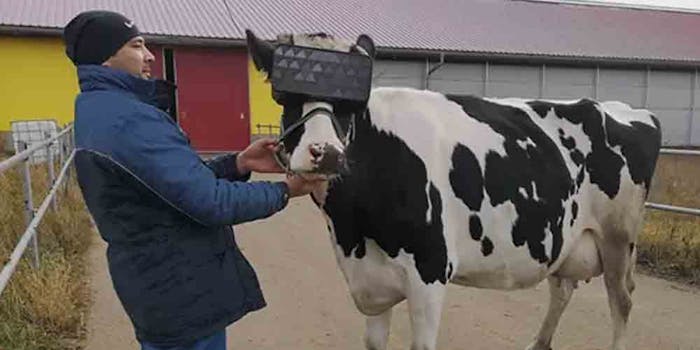 Ministry of Agriculture and Food of the Moscow Region (Public Domain)

VR headsets that display ‘summer fields’ are being put on cows

A farm in Russia has apparently outfitted its cows with virtual reality (VR) headsets in an attempt to combat their winter depression and boost milk output.

The project, which is being carried out at the RusMoloko farm just outside the capital city of Moscow, was announced this week by the Ministry of Agriculture and Food of the Moscow Region.

A Moscow farm has decided to equip its cows with VR glasses in order to relax and feel happier. A calm environment leads to an increase in milk yield, so the cows are given a VR headset displaying summer fields.

While many farms across the globe use tools such as music to create a calm environment for their bovine, Russia believes that showing its cows green pastures during the cold season produces a positive effect on their moods.

The ministry says early tests have already shown “a decrease in anxiety and an increase in the overall emotional mood of the herd.”

The headsets were created not only to fit a cow’s unique head but their vision as well, given that studies show “cows are better at perceiving shades of red than green and blue tones on the color spectrum.”

The ministry plans to continue monitoring the cows to see if milk production also increases due to the VR headsets. If those tests prove to be successful, the VR headsets could be mass-produced for cows all across the country.

“Technology improvements should impact the industry as a whole,” the ministry added.

Some questions have been raised, however, over the veracity of the project. As noted by the Verge, the study is not being run by a prestigious university but by a Russian dairy industry news site known as Milknews.

The concept of using virtual reality to improve an animal’s wellbeing isn’t a new concept, though. An assistant professor at Iowa State University suggested in 2014 placing VR headsets on chickens in an effort to convince them they were actually free-range.