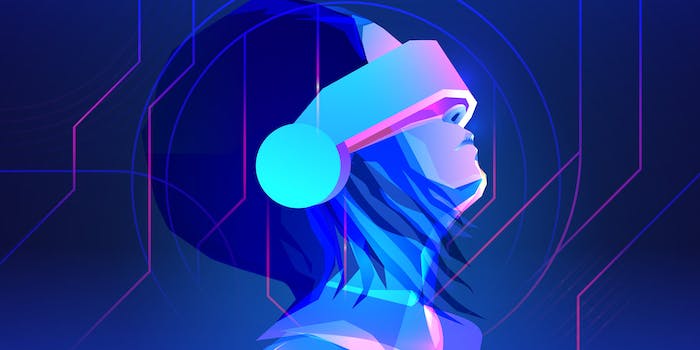 I am standing tall in a mansion’s boudoir, my back rigid, my hands at my sides. In front of me is a toned, half-naked blonde woman with devil horns. She looks like a succubus, complete with a domineering gaze that sends shivers down my spine. I am not supposed to be in her bedroom—yet here I am.

She asks me whether I will be obedient and follow her orders. I nod my head. She tells me to kneel. I comply. Slowly, I get down on my knees and place my hands on the back of my skull. I can feel my apartment’s cheap, hard floorboards strain my legs. But I refuse to get up. My domme has not commanded me to rise, so I will obey.

She is ready to send me away, pleased at my submission. But first, she asks me to lean over and kiss her feet. Eagerly, I do as I’m told. It’s somewhat difficult in my cramped Brooklyn, New York, room, but I’m able to bend just low enough so that she recognizes I am worshiping her at the lowest point possible. Happy with my devotion, she mercifully tells me to stand tall again before shooing me away from her presence.

Science-fiction stories have long fantasized about the possibilities of virtual reality. Some are optimistic, and others are far from it. One of my personal favorites is cryptic redditor _9MOTHER9HORSE9EYES9’s sci-fi horror story The Interface Series. Told through various non sequitur Reddit comments spread across the site, the novel describes a world where humanity has become so addicted to VR that only “the age-old desire to not spend one’s days playing Princess Romance Cafe, lying in one’s own shit while one’s dick rots off” motivates them to come out. Readjusting to the outside world is difficult, and many patients begin masturbating as soon as they leave the bed connected to their internet feeds.

The Interface Series captures so many modern fears about VR, adult content, and the internet. It’s something the tech world is thinking about more as virtual reality technology becomes more advanced. And it’s a fair concern to have. Watch Disrupt’s 168-hour look at life spent entirely using a VR headset to understand how the human body can adapt—but not necessarily thrive—solely in a man-made reality.

But writers who dismiss VR as humanity’s impending downfall miss the point. If we treat VR as just another technology that we can use in conjunction with the rest of our day-to-day lives, it can mitigate some of the more apocalyptic fears about society breaking down from overuse. In social media’s case—after two decades’ worth of Facebook, Myspace, Twitter, and YouTube—concerns with these platforms’ data collection systems, mental health effects, and capacity to foster right-wing radicalization are leading to a much more mindful tech life. Why wouldn’t that be the case with virtual reality?

“If we treat VR as just another technology that we can use in conjunction with the rest of our day-to-day lives, it can mitigate some of the more apocalyptic fears about society breaking down from overuse.”

Besides, VR’s core mechanic—sensory deprivation—is hardly new. Whether through haunted houses or meditation, flotation therapy or movie theaters, we regularly play with our senses to maximize our personal enjoyment. VR uses a mixture of motion-tracking technology, high-resolution screens, and ergonomic headset designs to do that, and that’s why it’s so impressive. But its core design principles really aren’t that different than, say, flipping through slideshows in a View-Master stereoscope, which explains why the company now has its own VR headset.

View-Master users were well aware of the attraction of a sensory-immersive experience half a century ago. Personal reels taken with both the View-Master Personal Stereo Camera and the 35mm Stereo Realist commonly featured “pin-up, risqué, or nude” shots, as researcher Jamie Powell Sheppard explains in a dissertation for Ryerson University. One company, Reel-O-Rama, let users buy reels filled with pin-up models posing seductively for the viewer.

It’s only natural that VR would embrace adult content. Headsets block out the world around you, thereby immersing you in on-screen visual data. It’s an elaborate trick designed to make your mind think you’re physically in the space you see through your headset, which is perfect for sexual content.

Waifu Sex Simulator feels like the porn game I wish I’d had as a teenager. Its developer, LewdFraggy, runs one of the top 500 most popular accounts on Patreon with over 1,300 patrons funding the game’s creation. The program lets players pick from a wide selection of fictional women from video games, anime, and comics and ogle them in a 3D sandbox. Besides gawking, players can choose different animations for their female character models to play out, from sitting down on a couch and watching a movie together to having full-on sex. The entire program is made with user-created content in mind, so you can add custom models, animations, and scenes to your game.

Narrative designer and games journalist Kate Gray is fascinated by the intersection between tech, games, and adult content. She has high hopes for VR’s potential, but as she outlined for Wareable in February 2018, the technology still presents uncomfortable problems.

Ideally, that’s work that should be done by privileged people who have the resources and platform to help change the adult industry. In reality, too few people with the power and resources to make changes care, and underrepresented people are forced to navigate through an industry that treats them like fetishes.

These problems aren’t that different from those of the games industry. According to Gray, “white, cishet tech bros” tend to dominate game development, with queer games “coming out of spaces that are cheap/free, easy to access, and easy to learn.” An International Game Developers Association survey from last year revealed that 74% of respondents across positions in the games industry identify as cis men, while 61% of workers are white, and 81% are straight. Resources are monopolized in privileged hands, so most game developers in queer communities are self-taught creators who rely on simple development platforms built for ease of use. But because there are so many moving parts behind VR games, queer users often lack the financial and social resources to develop them.

This is doubly a problem in an industry where even the most well-off adult game developers have to navigate the logistical nightmares behind sexual gameplay in an embodied, 3D space. Gray boils down VR design philosophies to two ideas: force the player to stand still or allow them to move.

“If you want to put your money and time into making something beautiful, you probably choose the former, because then you don’t have to worry about whether or not it looks good when the player walks around,” Gray said. “If you want full immersion, though, you’ll allow the player to move around. This causes a lot of problems. What if the player walks into furniture in their home? Will that kill their immersion? What if they get motion sick? What if the environment looks bad close up?”

In other words, VR adult content creators are forced into “the limits of the medium,” which means most adult developers gravitate to games with “basic 3D models and the ability to walk around them and inspect them.” It may be fast, cheap, and somewhat easy to create, she points out, but anything greater would take more time and energy through dedicated asset creation and design considerations. That means the adult catalog has more in common with the 2000s “Newgrounds” library—known for its extensive array of simple, adult Adobe Flash games—than 2019’s modern, 2D adult games space.

Despite all of the problems, some developers aren’t afraid to push boundaries.

In the game, which is being developed and funded via Patreon, players serve a wide range of mistresses spread out across a goddess’ mansion. These personalities range from sweet and gentle to sadistic and cruel, each with their own personal interests. Mistress Yuki-Onna, for example, is kind and caring, and she’s also into puppy play with her pets⁠—a form of pet play where submissives role-play as a pet dog for their dominant owner. Mistress Nega-Yuki, on the other hand, is much more sadistic, and she enjoys having sex with her submissives.

The idea first came from Deviant Dev, who realized players could “participate in their own submission” with VR movements. After experimenting with the limitations of VR headsets (and the human body), Deviant Dev refined the game’s controls to factor in the player’s position, such as whether they were on a bed or not, while Devilish Domina adapted the game’s script. These days, Devilish Domina collaborates with “an eager and clever sub” to continue scripting the game, along with a paid artist.

“At its core, this is a house filled with Mistresses, and the Goddess is the top of the food chain. Each Mistress has their own unique personality and style, and I select kinks that intuitively go with them,” Devilish Domina explained. “When I come up with a new Mistress, I think about their personality. The words they’d use to refer to the player. The types of tasks, rewards and punishments. Their tone of voice. I imagine all that first, and then the writing just makes sense.”

But The Villain Simulator and games like it aren’t inherently unethical or immoral. Adult media producer and political organizer Liara Roux regularly works as an advocate for sex workers’ rights. Roux (who uses they/them pronouns) stressed that it’s “deeply important” for sex education to improve in America, but that it’s “deeply unrealistic” to expect game devs to lead the U.S.’s cultural shift. While game developers should bring on sex workers, educators, and coaches to help consult on adult games, they believe that as long as “no actual person is having their consent trampled” in VR porn, fantasies should be protected because they are just that: fantasies.

“At first, we couldn’t figure out how to make [a player character] nonbinary. Maybe our own brains were stuck too much in a male/female mindset,” Devilish Domina explained. “But with the help of fans who did early modding of the game, we started to see all the possibilities. Being referred to as she, but hearing the male voice speak when the player ‘shakes or nods’ their head. Once we started working on getting player bodies into the game, fans got even more excited. It has really opened up our eyes to what is possible!”

“I have seen so many times, in both real life and in sex games, that kinks can be a way of coping and caring for yourself and others. Many marginalized creators of sex games make specifically kinky games, but a lot of them are focused on the aftercare, and the intimacy and trust involved with kink,” Gray said. “Kink and queerness seem intertwined in many ways, and though I’m not qualified to speculate why, it’s clear that love and trust is a huge part of it—being able to give and receive love and trust with someone else who shares many of your traumatic experiences.”

“Take the time needed to make this experience perfect, we can wait ;),” one eager patron wrote in April 2019.

VR’s best, kinkiest, and most inclusive days are still to come. There’s nowhere to go but up.