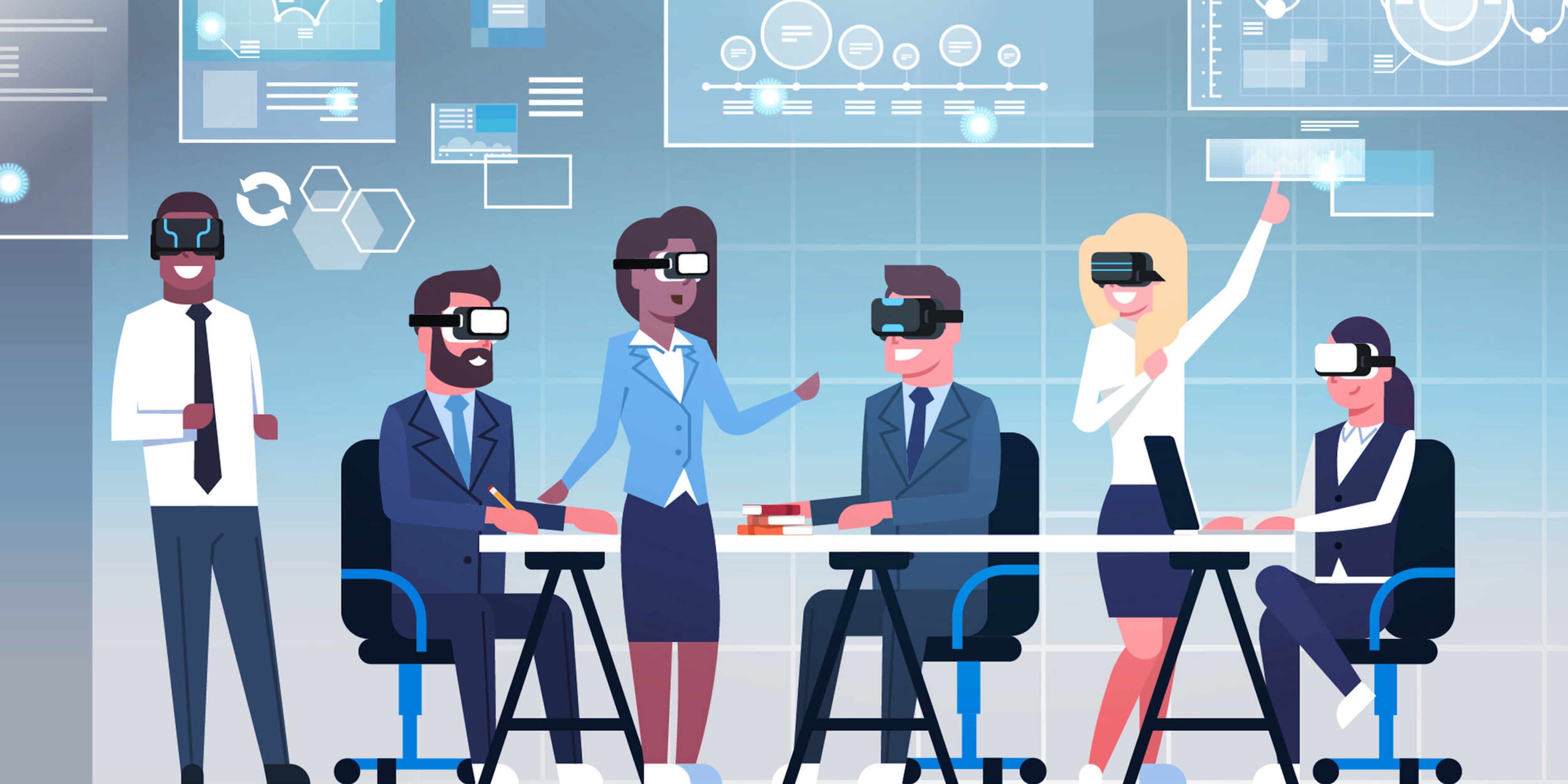 Virtual reality and the future of work

VR isn’t simply a collaboration tool, but rather a tool for creating shared experiences, perceptions, and even mindsets among co-workers.

You’re standing next to your boss and co-workers, talking them enthusiastically through your long-awaited plans for the company’s next big project. On the wall in front of you are a number of sketches of a monumental suspension bridge, while on the wall to the right are a series of handwritten notes outlining the construction process. Your colleagues look impressed with you and your work and say as much, but what’s most impressive about this whole exchange is that you’re not even there in the room with them. Neither are your plans. You’re actually 50 miles away, sitting in your bedroom in your underwear, having just rolled out of bed 10 minutes ago.

This use of virtual reality may sound like a vaguely amusing piece of science fiction, but it’s becoming an everyday affair for a growing number of workplaces in the U.S. and beyond. And in contrast to other present-day applications of virtual reality, what VR and augmented reality (AR) bring to the table here isn’t simply a convincing yet engineered reality, but also the ability to collapse physical distances and work in tandem with colleagues who may be tens, hundreds, or even thousands of miles away.

More interestingly, this use of VR also has the added benefit of being able to direct the attention and efforts of colleagues more effectively than other methods of workplace collaboration. In other words, it isn’t simply a collaboration tool, but rather a tool for creating shared experiences, perceptions, and even mindsets among co-workers. And this is precisely why it represents the next big leap in workplace cooperation and discipline.

Perhaps unsurprisingly, leading the way in the workplace adoption of VR are the engineering and manufacturing sectors. Here, one of the principal benefits of virtual reality is that it enables multinational corporations working to the standards of more than one jurisdiction to ensure that its products are compliant with different national standards. Thomas Serrurier, the marketing director at the Paris-based TechViz, reports that this is also one of the key selling points of TechViz Collaborative, which provides a shared virtual workspace for distant colleagues.

“Let’s take the example of an automotive manufacturer developing a new model to be assembled in multiple factories,” he says. “Even if the [3D] model is the same, constraints can differ from one plant to the other. For instance, the instrument cluster can be coming from the same supplier in Europe and Brazil but be mounted on the car before the steering wheel in Europe, whereas it is mounted after in the Brazilian plant. And for the China factory, the cluster may be coming from a different supplier altogether, with different geometry of the technical hardware.”

Serrurier adds that, with VR collaboration, engineers from all three locations can check the mountability of the instrument cluster very early in the manufacturing process. As such, they can all agree on any necessary design changes within the VR workspace, thereby saving a significant amount of time and avoiding costly redesigns specific to each factory.

A casual observer might wonder at this point why a geographically scattered team would need virtual reality to work on a specific product or project, given that there are already many collaborative desktop apps, programs, and websites currently available for them to share information and tasks. Well, figures working within the nascent VR industry affirm that the technology brings numerous benefits beyond simple remote working, with the vividness of 3D representations being chief among them. 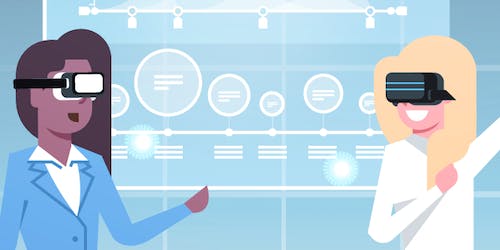 “VR/AR allows the team to visualize literally anything and—more importantly—interact with the visualized objects,” explains Gleb Braverman, the CEO and co-founder of Watty Technologies, which produces apps for shared augmented reality experiences and interfaces. “Notes one usually takes in Trello can be transposed to a 3D sticker or even represented as a spatial model to brainstorm on.”

As Braverman notes, visual perception (and memory) stands as the most dominant human sense, with around 70 percent of the human body’s sensory receptors being located in the eyes. And because we’re biologically hardwired to respond to visual information more than anything else, Braverman argues that the more vivid and detailed a visual representation is, the more successful any corresponding collaboration will be. “In cases such as art modeling, architecture, healthcare, graphic design, and even engineering, an accurate and correct visual representation equals the successful outcome of the collaboration, especially when parts of the team work remotely.”

It’s for such reasons that there’s a real belief that VR is superior to other forms of workplace collaboration, and it’s also why a growing number of employers and organizations are turning to virtual reality. With TechViz, Serrurier points out that, even if there’s no hard quantitative data on the operational benefits VR delivers, there’s indirect data in the form of increasing uptake numbers. “The best measure of success for us is that the take rate of the collaboration feature keeps increasing,” he says. “In 2018, 60 percent of the immersive rooms we equipped with TechViz software included Collaborative and up to 90 percent for VR headsets.”

A similar assessment is provided by Jacob Loewenstein, the vice president of business development and strategy at Spatial, which launched in October 2018 and builds a range of software enabling people to collaborate using AR. Already, it boasts Mattel and Ford X as customers, and Loewenstein reports that it has been receiving positive feedback. “Anecdotally, customers are saving tens of thousands of dollars using the platform and reporting strong subjective improvements in the overall impact of their meetings,” he says.

Loewenstein adds that 125 Fortune 1000 companies are inquiring about Spatial’s products, while other organizations more generally are developing an interest in VR. In March, the U.K.’s Ministry of Defence conducted its first VR-based collaboration, with personnel stationed at various Defence Science and Technology Laboratory sites meeting virtually in order to collaborate on the design of an aircraft engine. In November, Hyundai opened a VR auditorium that enables teams based in South Korea, Europe, and the U.S. to work simultaneously on the same models. And there are now even business schools in the U.S. which use VR for collaborations among students, with the likes of MIT’s Sloan School of Management using virtual reality to simulate and teach policy negotiations.

Demand is evidently growing for VR- and augmented reality-based collaborative software, just as the number of companies offering such software and technology is growing, ranging from Spatial to MeetinVR and Dream. “We seem to be at an inflection point,” says TechViz’s Serrurier. “Until recently, VR-based solutions were implemented in companies through a group of innovators for very specific use-cases. With the development of professional VR headsets such as HTC Vive Pro and software collaborative capabilities, VR is starting to spread throughout organizations, winning over different departments and office locations.” 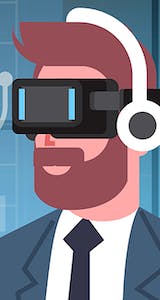 “Starting to spread” is the operative phrase: The VR industry is still largely in the “early adoption” stage. But one added benefit could help push it toward more widespread adoption. Specifically, VR has the power to provide employees with the same experiences, something which could prove vital in instilling a greater sense of shared purpose and culture in a workplace—and in turn ensuring the productivity of collaborations.

According to Spatial’s Loewenstein, VR can provide “deeper engagement” and help build kinship even beyond what face-to-face meetings can offer. “AR/VR can offer many benefits over face-to-face communication,” he says. “As an AR-first solution, with Spatial, not only do you feel a deeper sense of connection by feeling like you are in the room with people, but you can upload any type of information and paint the walls with it, interact with it, and explore it. Imagine being face to face but also being able to instantly materialize and interact with any information.”

Even commentators outside the AR/VR industry also attest to the power of virtual reality. “For online businesses that have employees across the nation, VR helps all employees and/or contractors feel more connected to the team during meetings,” says Chad Felix, a VR expert and CEO of follower-boosting firm SocialSteeze. “Additionally, when it comes to things such as trainings or work collaborations among different departments of the business, it helps everyone to better understand what is expected of them.”

Indeed, Felix argues that VR collaborations are advantageous even for employees who may be in the same office. “VR provides an experience that can’t be achieved during just a normal face to face collaboration,” he explains. “For example, you can change the environment to make it relaxing for all, or even go as far as to having participants experiment with different scenarios without having to pull out an assortment of equipment.”

VR permits companies to do two things in this respect: to simultaneously focus the attention of employees on the same things, and to immerse employees in similar environments, which will potentially have comparable effects on their moods and attitudes. By doing this, companies could expect to wield more commanding control over how their employees experience and pursue work. And because we’re moving increasingly towards a more dispersed, flexible, and remote workforce, such capabilities are likely to prove vital in the coming years and decades with regards to maintaining company discipline and cohesion.

Of course, even with its apparent benefits, the widespread adoption of workplace and collaborative VR won’t be free of obstacles. For one, there’s the fact that virtual reality depends on creating an artificial environment that has to predict and predefine how virtual objects should behave. As Braverman explains, this has the risk of imposing too many demands on VR, and of making the realism of VR simulations dependent on the foresight of developers. Nonetheless, he suggests that such challenges can be overcome by leaning more towards AR.

“AR does not require any prediction, it therefore can be adjusted to real-time events (users are interacting in a real-time environment), while VR environment is by its nature predefined,” he explains. “VR is a script: It can be a brilliant one, but it can’t overcome the limits and variability embedded by the developers.”

And as with almost every technological development, VR could also require a considerable adaptation on the part of employees, who may not be able to extract the full advantages of VR and AR without updating their skills. Fortunately, one of the major innovations of the new wave of VR systems is that, compared to the computer-aided design (CAD) systems of the past, they’re easier to use and more consumer-friendly.

“The adjustment may be more in terms of process and soft skills,” says TechViz’s Serrurier. “For instance, it has to become a kind of reflex to check a project in VR at each development stage, in order to make the most of the technology. One also has to learn how to interact in a virtual environment.”

This, however, will arguably become easier as more of us live and grow up with digital technology. And according to Serrurier, “the learning process goes both ways,” since users of VR tools and programs often invent novel, unexpected uses for them. This means that VR could potentially have the additional benefit of helping us find new ways of working, and in combination with its ability to bridge physical distances, cut costs, and ensure greater workplace cohesion, it’s hard to shake the impression that it will enjoy an important presence within tomorrow’s workplace.