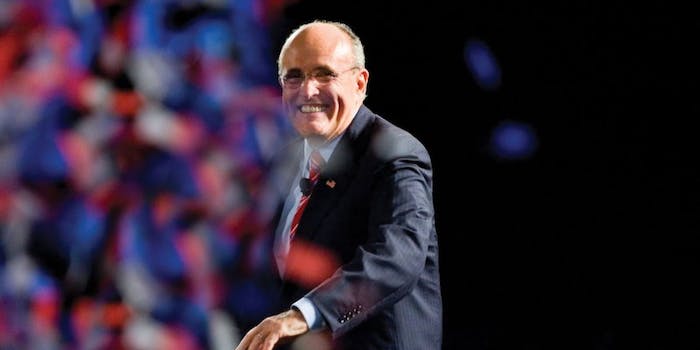 Rudy Giuliani sure knows how to make news.

Last week, the former New York City mayor started a small political firestorm when he said that President Barack Obama didn’t love America. Having been savaged by just about every reasonable political commentator in the country, Giuliani is now jumping back into the fray to clarify his point.

In a Wall Street Journal op-ed titled “My Bluntness Overshadowed My Message”, Giuliani tried to explain himself to the world.

“My blunt language suggesting that the president doesn’t love America notwithstanding, I didn’t intend to question President Obama’s motives or the content of his heart,” Giuliani wrote.

That one is a head-scratcher on several levels, not the least of which is that, just a few days ago, Giuliani said he “conveyed exactly the message I wanted to convey.”

What Giuliani wanted to criticize, he explained in his op-ed, was Obama’s negative effect “on the morale of the country, and how that effect may damage his performance.”

“[Obama’s] inability or disinclination to emphasize what is right with America can hamstring our success as a nation,” he wrote.

Giuliani’s remarks are not likely to quiet the critics, nor are fans of the mayor likely to be dissuaded by pundits demanding an apology. The conversation surrounding his remarks has, of course, continued online.

To prove he loves America as much as Rudy Giuliani, Barack Obama would need to marry at least two more Americans.

Rudy G's always been a tad quick on the draw, but he only said what 100 million+ Americans really think. Hence the manufactured hysteria.

In fact, Obama heaps praise on the United States in pretty much every speech he gives.

The Washington Post even took the time to gather over a dozen examples of Obama verbally expressing love for his country over the last seven years of his presidency.

Last week, Giuliani said he wanted to hear more “wonderful words about what a great country we are, what an exceptional country we are” from Obama.

Your wish is our command. The Post’s list is but a tiny fraction of the president’s emphasis on “what is right” in this country, but it is nonetheless proof positive that Giuliani has no idea what he’s talking about.

Here’s a sampling of rosy-eyed optimism from Obama’s speeches from just the last week.

“Let me propose a toast…to what Thomas Jefferson once described as our country’s precious blessings, “its soil, its climate, its equality, liberty, laws, people and manners…which no other people on Earth enjoy.”

Obama at the designation of three new national monuments, Feb. 19:

“A massive, moral revolution for jobs and freedom.”  And that’s not just the story of a movement, that’s the story of America.  Because as Americans, we believe that workers’ rights are civil rights.  (Applause.)  That dignity and opportunity aren’t just gifts to be handed down by a generous government or by a generous employer; they are rights given by God, as undeniable and worth protecting as the Grand Canyon or the Great Smoky Mountains.

Obama at the closing of the summit on countering violent extremism, Feb. 18:

As Americans, we are strong and we are resilient.  And when tragedy strikes, when we take a hit, we pull together, and we draw on what’s best in our character — our optimism, our commitment to each other, our commitment to our values, our respect for one another.  We stand up, and we rebuild, and we recover, and we emerge stronger than before.  That’s who we are.

If Giuliani wants to criticize Obama in a fair and factual way, the numbers suggest that his current strategy is unsound.

If he wants to make headlines, however, he’s unquestionably succeeding.