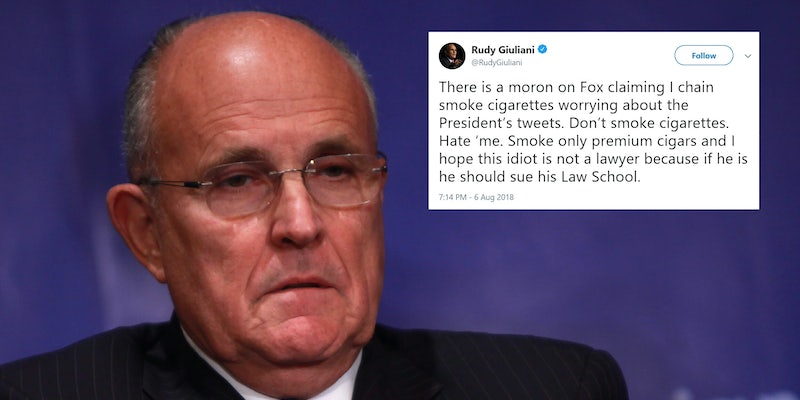 In case you didn’t know, Donald Trump‘s septuagenarian lawyer Rudy Giuliani is on Twitter, doing tweets to pass the time. Here’s one from last night, calling out a “moron” on Fox.

There is a moron on Fox claiming I chain smoke cigarettes worrying about the President’s tweets. Don’t smoke cigarettes. Hate ‘me. Smoke only premium cigars and I hope this idiot is not a lawyer because if he is he should sue his Law School.

There’s a lot there, so let’s dive right in.

First off, the phrase “there is a moron on Fox”—was that ripe for memetic interpretation? Yes.

That there is irony, I tell ya'! IRONY! https://t.co/sIkizcQXnV

Because, you know, Giuliani has frequently been a moron on Fox.

Secondly, there’s the typo. Giuliani meant to say “hate ’em,” we can assume. But instead, he said “Hate ‘me.”

Was he calling on people to hate him? Was he saying he hated himself?

People were happy to infer both.

Lol. Giuliani accidently tweeted that he hates himself. He should be tougher on himself. https://t.co/WsFFtVdLmP

That "Hate 'me." typo may be the most nakedly honest thing Rudy has said since 9/11 https://t.co/1OPADRb9CH

The typo is his second major Twitter gaffe of the past week. But then there’s just the fact that the president’s personal lawyer is watching Fox and using Twitter to hurl insults at guests over minor grievances.

They’re perfect for each other.