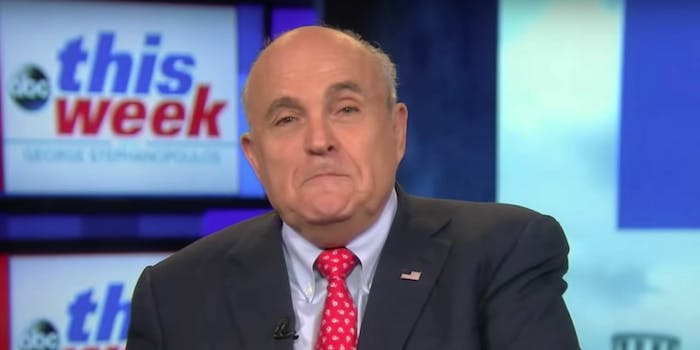 Can a president really do that?

In a statement which some on Twitter are calling “undemocratic and outrageous,” Rudy Giuliani said that President Donald Trump “probably does” have the power to pardon himself.

The question over Trump’s potential pardon, posed by ABC News’ George Stephanopoulos in an interview Sunday, was regarding an investigation of whether the president made efforts to obstruct justice in the probe of Russian efforts to interfere in the 2016 presidential election. Giuliani is now Trump’s personal attorney in negotiations dealing with special counsel Robert Mueller‘s investigation.

“He has no intention of pardoning himself but … [that’s] not to say he can’t,” Giuliani said. “I think the political ramifications of that would be tough.” But Giuliani added that other presidents have pardoned individuals in their administration “in circumstances like this.”

Giuliani is part of the legal team that sent a 20-page letter to Mueller early in the year laying out the president’s legal strategy in the Russia investigation.

The letter was dated in late January and argued Trump could “terminate the inquiry, or even exercise his power to pardon if he so desired,” ABC News reports. The letter also said the commander-in-chief “could neither constitutionally nor legally constitute obstruction” because of his position. So basically, the letter argued Trump’s position as “chief law enforcement officer” makes him unable to commit obstruction of justice.

Yes, the country has been there before. And Twitter is recognizing it.

It seems that none if them have studied up on history.

If there was ONE thing we learned from Watergate it is that the President is not above the law.

The social network is up in arms at the fact that Giuliani said Trump may have the ability to pardon himself if proven guilty of obstruction of justice.

AGAIN, I point out, if he's INNOCENT of all wrongdoing, WHY would this even be a consideration?

It's cause Trump is guilty af.

so in a government designed by the founders to provide checks and balances there is no check on presidential pardons intended to obstruct justice or offer a bribe to potential witnesses against the president?

Giuliani has been all over the news lately concerning investigations into Trump. Giuliani recently said the legal team for Trump “will likely recommend that he not speak with investigators,” concerning whether Trump would testify before Mueller’s team, Politico reports. The decision of whether to testify is up to Trump, but according to his legal team, the president cannot be compelled to testify.

Former U.S. attorney and CNN legal analyst Preet Bharara said if Trump does end up pardoning himself, it would be “almost self-executing impeachment,” CNN reports.

“Whether or not there is a minor legal argument that some law professor somewhere in a legal journal can make that the President can pardon, that’s not what the framers could have intended,” Bharara said on CNN’s “State of the Union.”That’s not what the American people, I think, would be able to stand for.”