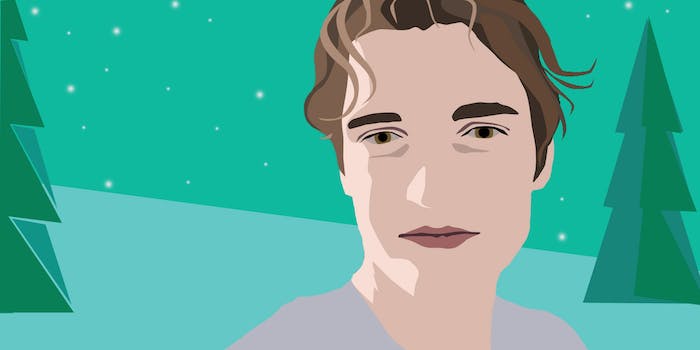 It may not even be Thanksgiving yet, but it's already Christmas season on the Dark Net.

Ross Ulbricht has been sitting in jail since the day last October, when federal agents swarmed the Glen Park Public Library in San Francisco and led him out in handcuffs. The 30-year old Austin, Tex. native was accused of using the handle “Dread Pirate Roberts” to run the Silk Road, then the world’s biggest online back market for everything from forged documents to a pharmucopia of illegal narcotics.

Over the ensuing months, while Ulbricht has been awaiting trail, a group of Redditors have elected to band together to make his holiday season a little bit jollier. In a recent thread posted to Reddit’s r/DarkNetMarkets community, Reddit’s hub for discussion about online back markets, a group of the site’s users are collaborating to buy Christmas presents for Ulbricht and mail them to him in prison.

Suggestions about yoga mats come from reports that Ulbricht has taken to leading a yoga class for the other prisoners. Although, any attempts to send yoga supplies will almost certainly be unsuccessful.

“That is so wonderful of them [to organize a gift drive]. … However, nothing can be sent to Ross in prison except books directly from seller (i.e.: Amazon or another seller),” wrote Ulbricht’s mother, Lyn, in an email to the Daily Dot. “I wish it were otherwise. I asked him about this just yesterday when I saw him. He has a lot of books right now and is spending most hours reviewing the pile of discovery.”

A fierce advocate for both her son and for Internet freedoms, Lyn adds:

“Honestly, donations to his legal defense fund would go farthest to helping Ross right now. Even though we’ve raised a lot, we are way behind because it’s so incredibly expensive, and the trial will be even more costly. Plus, we have forensic experts to pay, so whatever they might have spent on something else would be best spent there. Donations into his commissary account would be useful too if people preferred to do that. In that case he can buy himself what he needs and wants. Of course we make sure that this is always funded, and Ross is quite frugal, but that would also be a help.”

While donations to Ulbricht’s legal defense fund, which his mother is running, can be made through her website, contributions to he commissary account can only be sent via Western Union through the Department of Prisons at the account number #18870-111.

The organizers of the drive didn’t respond to a request for comment, but there are a number of possible reasons why they might be supporting Ulbricht. Setting aside arguments that Ulbricht is innocent and being unjustly railroaded, even if he was the creator of the Silk Road, it’s not hard to see why a decent number of people might want to buy him a Christmas present.

Ulbricht allegedly ran the Silk Road as a libertarian political statement as much as a money-making venture. In a post on his LinkedIn page that can easily be interpreted to be talking about the Silk Road, Ulbricht wrote:

For people who share those ideals, and maybe also appreciate how the Silk Road made it possible for them to buy pot without having to make awkward small talk with their drug dealers, showing Ulbricht some appreciation isn’t hard to understand.

There’s also the argument to be made—in The Atlantic, for example—that Ulbricht’s alleged work on the Silk Road actually made the world less dangerous place by taking drug transactions off the street, thereby decreasing the possibility of violence for things like gang turf wars, as well as instituting a rating system that pushed customers to buy products from well-respected dealers instead of those selling dangerous fakes.

In addition, the most eyebrow-raising allegations against Ulbricht, that he hired professional hitmen to kill several people, didn’t actually make it into the Department of Justice’s criminal indictment. Even though Ulbricht was initially painted as a cold-blooded killer in the days immediately following his arrest, its appears as if prosecutors may not have enough evidence to actually prove it. (Or, they could be waiting to charge him for the alleged murder-for-hire schemes if their other charges don’t stick at trial.)

Viewed in this light, efforts to help Ulbricht make a good amount of sense.

“Please convey to these good people how much we appreciate their thinking of Ross at Christmas,” wrote Lyn Ulbricht. “We are very touched by this and will tell Ross next time we speak to him.”