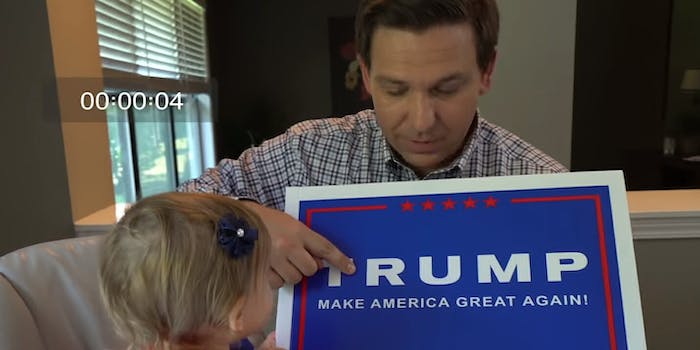 In case you were wondering, Ron DeSantis is very pro-Trump.

Ron DeSantis, a Republican candidate running to compete in Florida‘s gubernatorial election, released an ad on Monday where he aligns himself with President Donald Trump by using his child as a prop.

The video, narrated by DeSantis’s wife Casey, tries to show the candidate for governor as an unabashed Trump supporter—and apparently wants those values distilled in his toddler.

It shouldn’t come as a shock that his campaign would release a gushing tribute to the president. Last week Trump tweeted that he endorsed DeSantis, adding that he would be a “great” governor.

The ad goes through a number of pro-Trump activities the candidate apparently does with his children.

First, it shows DeSantis playing with colorful blocks with his child, telling his daughter to “build the wall!”

Then, as his wife puts it, he “reads stories” to his children—evidently including The Art of the Deal, a book ghostwritten by a now frequent Trump critic.

“Then Mr. Trump said ‘you’re fired!'” the candidate reads to his child. “I love that part.”

As his wife explains that he is teaching his daughter to talk, the video shows him holding a Trump sign and reading to her “Make. America. Great. Again.”

The video ends with DeSantis’ wife explaining how great of a father he his.

“People say Ron is all Trump, but he is so much more,” she says, before the candidate uses two of the president’s frequent tics: “Big League,” and “So good.”