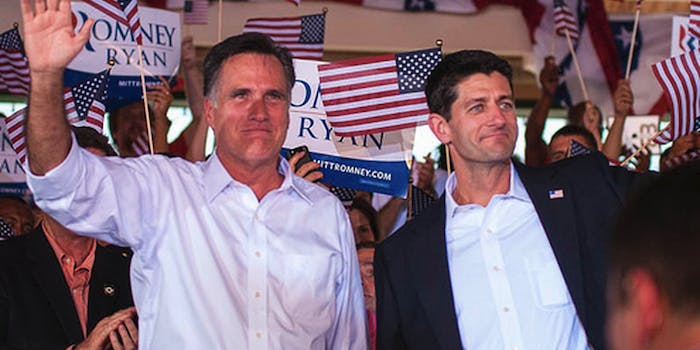 There's plenty of satirical fanfiction about Mitt Romney and Paul Ryan, but are earnest fans of the Republic presidential ticket writing stories of their own?

The biggest question that The Atlantic’s recent discovery of satirical Mitt Romney/Paul Ryan fanfiction raises is not, “Holy crap, there’s fanfic of these two?!”—Rule 34, folks—but rather: “Is there any political fic of these two out there that’s actually not a) satirical, or b) trolling us?”

Satirical fanfiction in the media is nothing new. We saw it during the first flush of the Obama administration, when John Scalzi and HuffPo wrote White House fanfiction, and Twitter users followed the unresolved sexual tension between Rahm Emanuel parody account @MayorEmanuel and Carl the Intern.

Even The Guardian is running an ongoing series of parody RPF (real person fiction) emails between President Obama and a rotating coterie of extras, from John Boehner to Jon Stewart.

But in addition to the tried and true element of satire, unironic fanfiction coming from the political and pundit fandoms has always been in good supply—for Democrats, at least. Rahmbamarama, a fandom community founded in 2008 by the author of this article to house fanfic focused on the then-Chief of Staff and other politicians, thrived during the first half of Obama’s term, and still has over 2,700 members. Punditslash, likewise heavily active during the early Obama administration, had significant overlap between pundits and politicians. And then, of course, there’s a little thing called The West Wing.

So where is the real fanfiction for deprived Mitt Romney fans?

Granted, it’s not easy to find openly Republican fanfiction writers, given that fanfiction tends to skew transgressive; slashfic, especially, promotes the acceptance of homosexuality as normal, even ideal. The Daily Dot took the advice of legendary sci-fi editor Teresa Nielsen Hayden, who advised The Atlantic in comments to stop being “oblivious” to the popularity of fanfiction and “consider trying Archiveofourown.org, where it’s much easier to sift out the good stuff.”

The AO3 turns up a paltry 64 hits for “Political RPF – US 21st c.” Most of the fics are about Rahm Emanuel, the Obamas, and pundits; but there are some surprises, including an Edward Cullen/Sarah Palin story. “I really don’t like Twilight,” notes the author. “Or Sarah Palin.”

It was almost impossible to bite back on the laugh at the light that brightened in the young woman’s eyes, the slightly sly upturn of lips at the word ‘power’. “You are more like a young Sue Sylvester than you know. You can’t do a handspring to save your life… but you have pluck. How badly do you want it?”

“Power… fame… anything you dream of. For the right price.”

Hesitation flickered across the young woman’s face as Sue stared at her. Words bubbled from her lips, spilling from her brain and rearranging themselves nonsensically before they left her mouth. “Power is, you should only go there for the right reasons. Ronald Reagan he wasn’t on a personal discovery, he had… he had fame and power and he uses it right. You can’t do it for the power, it has to be the right reasons. Good reasons.”

There are other, thoughtful takes on the political machine, too. A mythical, poetic fanfic about the succession of ruling power labels itself “John Kerry/John Edwards,” but could really be about any party in power.

There will always be plenty of tongue-in-cheek political fanfiction, like the ryanxromneyfanfics Tumblr and others like it, and although our search for unironic Mitt/Paul fic failed us, it’s almost certainly out there. Like cynical Rahm Emanuel letting himself believe in idealist Barack, the few earnest political fics about the right wing suggest that it’s only a matter of time before someone writes a humanizing fic about the 2012 Republican presidential ticket.

And that will be change we can all believe in.