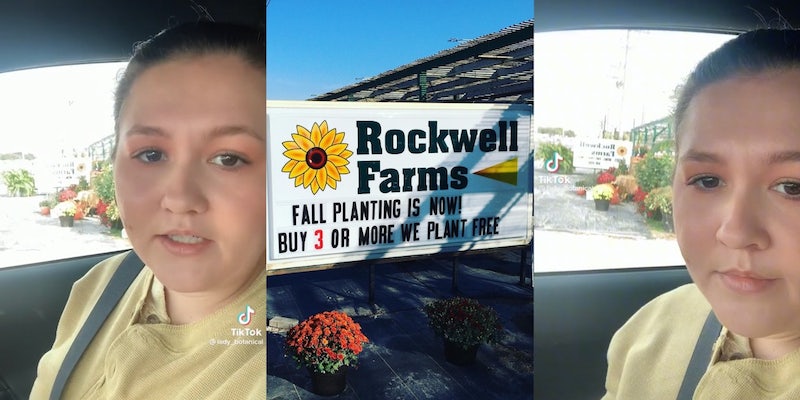 ‘I was then asked if I believed in free speech’: Applicant says garden center asked if she’s liberal or conservative during job interview

'They didn't ask me too much about my experience with plants.'

A job applicant says that she was asked about her political beliefs and marital status during an interview with Rockwell Farms Nursery in Rogers, Ark., in a now-viral TikTok.

In the video posted by TikToker and Florist Lady Botanical (@lady_botanical) on Oct. 11, she shares a clip of her sitting in her car after an interview with a local nursery, where she alleges she was asked to disclose whether she has any children, is married, or if she “believes in free speech.”

“Upon coming into the interview, they didn’t ask me too much about my experience with plants. I did, however, get asked if I had any kids, if I was married or if I was a liberal or conservative,” she says in the clip. “When I said that I leaned more towards the liberal side, I was then asked if I believed in free speech.”

She notes that “you can’t legally ask” a prospective employee about their political beliefs and personal life, saying that she plans to “contact the labor board.”

“For the most part, I thought everyone believed in free speech,” she continues. “I assume he’s asking me if he calls someone a slur that I’m not going to get offended or say anything.”

The Daily Dot reached out to Rockwell Farms Nursery via email and Facebook direct message but was not met with a response prior to publication.

The video has reached over 274,000 views as of Wednesday, with commenters putting the business on blast for their alleged discriminatory interview practices.

“All of those questions are illegal and discriminatory. Find yourself a lawyer. Enjoy the time off,” one user suggested.

“Good for you. That is SO illegal. I can’t imagine what it’s like working there,” another said.

Other users said they left bad reviews on the nursery’s Facebook page; however, the reviews tab was disabled as of 4:37 p.m. CST. On Google, others wrote scathing reviews calling the establishment “trash” and “vile,” warning prospective customers and employees to avoid the business.

“Isn’t interesting how a trash nursery is asking applicants about their political affiliation…That is against the law! I will be making SEVRAL complaints. Have the day you deserve!!,” one reviewer wrote.

“Don’t shop or apply here! They discriminate and ask illegal questions in the hiring process!” another said.

The Daily Dot reached out to Lady Botanical via Instagram direct message.