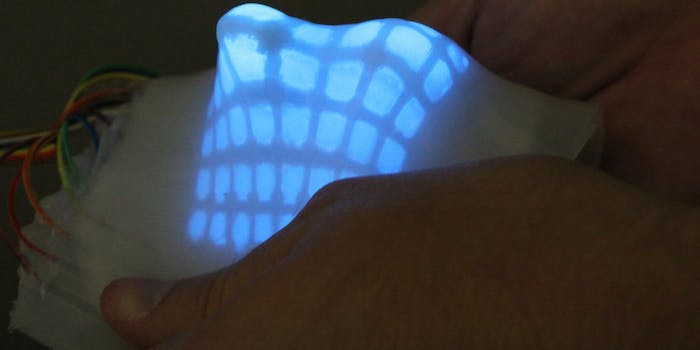 Researchers have finally created the skin that will coat our robots

This would make the perfect suit for The Incredible's Elastigirl.

Researchers at Cornell and the Italian Technology Institute in Pontedera have created a robotic skin that glows, stretches, and feels.

The material is made of layers of transparent hydrogel electrodes that envelope a zinc-sulfide dielectric elastomer layer, creating thin rubber sheets that change illumination and capacitance. The hyper-elastic light-emitting capacitor (HLEC), partially funded by the Army and the Air Force, can stretch up to five times its original size, is twice as strong as previously tested skins, and adapts to pressure.

So why do we need such strong, stretchy, bright skin? For our robots, according to Rob Shepherd, researcher of the project and assistant professor of mechanical and aerospace engineering at Cornell.

“We can take these pixels that change color and put them on these robots, and now we have the ability to change their color,” Shepherd said. “Why is that important? For one thing, when robots become more and more a part of our lives, the ability for them to have emotional connection with us will be important. So to be able to change their color in response to mood or the tone of the room we believe is going to be important for human-robot interactions.”

A short film released two days ago suggests that appearances will be important to us when it comes to choosing our robots.

A more immediate and widespread use of the skin could involve wearables, which require hard technology on soft skin. Devices could benefit from a material that is both comfortable and optimized for monitoring the body, like Hexoskin.

Here is a neat video of this skin going through testing.