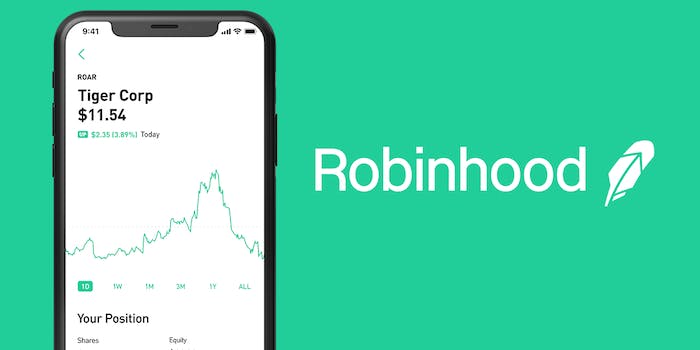 Everything you need to know about investing app Robinhood

When Robinhood first launched in 2013, it completely changed the game.

When Robinhood first launched in 2013, it completely changed the game. It’s become one of the most successful fin-tech (financial tech) startups to emerge in the U.S. market within the past decade. Essentially, it allows ordinary retail investors (the likes of you and me) to purchase stocks and other securities without paying a commission on each trade.

If you’re new to the world of investing, it’s easy to gloss over how revolutionary this is. Previously, established brokers charged their customers onerous fees per trade (often between $5 and $10 per buy or sell order), in addition to ongoing account maintenance charges.

Predictably, this made it not especially worthwhile for individuals to self-invest their money, thereby pushing them in the direction of managed investment vehicles, which allow far less control.

Of course, that brief description leaves a lot of questions unanswered: If Robinhood doesn’t charge fees, how does it make money? What kind of securities and instruments can you buy with Robinhood? And does it have any competition?

When the firm emerged out of stealth in April 2013, it allowed users to buy and sell stocks, ETFs (which are bundles of stocks and bonds hand-picked by a third-party company, like iShares or Vanguard), and REITs (which are investment funds that focus on real estate).

Thanks to the nonexistent fees and its easy-to-use interface, the firm exploded in size. By the time it announced its Series A funding round in September 2014, it had already attracted 500,000 customers. Most of these fit snugly into two distinct categories: millennials and first-time investors.

Effectively, Robinhood was tapping into a market that had otherwise been neglected by its competitors. And, as the company grew its user-base, it began rolling out more and more features, allowing users to invest in more sophisticated financial products.

In 2017, it introduced a much-requested feature: commission-free options trading. Although equity securities are relatively straightforward to explain (you buy a share at one price, and it either goes up or down), options are slightly more arcane.

On an elementary level, they’re contracts that give investors the option (but, and this is important, not the obligation) to purchase securities at a specific price on a particular date. Here’s an example: Let’s say you buy a contract to purchase Apple stocks at a strike price of $150 by the end of the year. You think the price will surpass that strike price, so you’re effectively getting a top-notch stock for a knockdown price.

Me, on the other hand, I’m convinced Apple’s share price is going to tank, so I sell you that contract. Regardless of whether you exercise your options or not, I still get to keep the premium you paid to forge the deal.

But what happens if the share price goes beyond $150? What if it hits $200 or even $300? In that scenario, you can execute your options, allowing you to buy the share from me at the pre-defined price we agreed upon earlier.

If the call is a “covered call,” I have the stocks in my portfolio, which I sell to you at a steep discount on the market rate. If it’s a so-called “naked call,” I’ve got to buy the shares and hand them over, which is sometimes vastly expensive depending on the movements of the market.

There was a huge customer demand for options trading, largely because it was previously prohibitively expensive for retail investors. When the feature first launched on Robinhood, the likes of E*Trade and Scottrade were charging between $10 and $25 to create and execute options contracts. Ultimately, this feature gave Robinhood users more leeway to make (and indeed, lose) money from their investment activities.

Margin is a fancy way of saying “credit.” Let’s say you have $1,000 and you want to buy a bunch of options that you couldn’t afford by yourself. Robinhood would effectively loan you the cash.

And while there’s nothing inherently wrong with this, some have questioned the wisdom in providing margin to relatively unsophisticated investors. Those concerns were vindicated earlier this week, with the discovery of an “infinite money” glitch in the popular trading platform.

The company also offers a debit card called Cash Management, which allows users to spend uninvested cash in their Robinhood accounts. This money could come from dividends or deposits, and attracts an interest rate of 2.05 percent APY, which is far superior to the meager interest offered by most conventional checking accounts.

Robinhood tried to launch a similar product last year called Robinhood Checking, albeit this had an even more impressive interest rate of 3 percent APY. Unfortunately, the product began to unravel when it transpired that the company had failed to secure insurance from the SIPC (Securities Investor Protection Corporation).

In the face of mounting criticism, Robinhood shelved the plan, only to revive it earlier this year. This time around, Robinhood has secured depositor insurance. Each Robinhood Cash Management account is protected up to $1.25 million, which is far beyond the $250,0000 offered by the FDIC (Federal Deposit Insurance Corporation).

Without charging fees, how does Robinhood make money? The reality is its business model is somewhat akin to an ultra-low-cost airline like Spirit or Ryanair, where the primary revenue doesn’t come from the core product (airline tickets, or in this case, trades), but rather ancillary products and services.

Robinhood makes money in a few different ways. Much of its revenue comes from premium services, like Robinhood Gold, as well as the fees it charges for margin trading.

And, as is common in the industry, it collects interest on the uninvested cash lingering in customer accounts. It also passes on regulatory fees (which are typically less than a cent) which are rounded up to the nearest penny, with Robinhood pocketing the difference.

Controversially, a considerable part of Robinhood’s revenue comes from something called “payment for order flow,” or PFOF. This practice, which was pioneered by the controversial financier Bernard Madoff, is where a broker receives rebates from market makers (like dealers and securities exchanges) to influence how orders are processed.

In 2018, Alphacution estimated that $69 million of Robinhood’s revenue came from this practice, which was an increase of 227 percent on the previous year. For what it’s worth, Robinhood emphatically claims that rebates don’t factor into how it routes orders.

PFOF is a legal practice in the United States. In parts of Europe, including the U.K., it is banned over concerns that it encourages brokerages to act in ways that aren’t necessarily in the user’s best interest.

Founded in San Francisco in 1971, Charles Schwab is one of the most respected brokerage firms based in the United States. It’s also one of the firms that were “disrupted” when Robinhood first landed on the scene in 2013, with many of the company’s smaller retail investors heading to the greener (and cheaper) pastures, tempted by fee-free trading.

And in October of this year, the firm announced that it was transitioning to the same fee-free revenue model pioneered by Robinhood. Charles Schwab may not be the first legacy broker to make this move (it follows Vanguard, J.P. Morgan, Interactive Brokers, and T.D. Ameritrade), but it definitely won’t be the last. After all, it’s tough to compete with “free.”

That said, Robinhood doesn’t have much to worry about so far. It’s got the advantage of being a first-mover, having offered fee-free trading for over five years now. Furthermore, the legacy brokerages still carry somewhat of a reputation for being expensive places for ordinary retail investors, even if that isn’t strictly true anymore.

As an aside: Robinhood is in the early stages of an expansion into Europe, with a U.K. launch expected imminently, and other countries to follow. This move is significant because it’ll be entering a market that’s already had fee-free trading for quite some time.

Its two main rivals will be Trading212, which specializes in facilitating more speculative investments, and Freetrade, which is comparatively conservative. It doesn’t allow users to buy shares or financial instruments on margin, for example, and strongly emphasizes cautious long-term investing.

Furthermore, the wildly popular fin-tech startup Revolut is in the early stages of rolling out a brokerage platform, which, thanks to its Europe-wide footprint, promises to make life complicated for Robinhood.

American readers might not be too familiar with Revolut, but in Europe, the company is hugely influential. It’s somewhat of an interesting beast, performing the roles of a traditional bank, money transfer service, bureau de change, cryptocurrency exchange, and stockbroker in one comprehensive package.

This complexity makes it hard to describe. Still, it also makes it a compelling threat to Robinhood’s global aspirations, not least because it holds a European banking license issued in Lithuania, which allows the company to offer sophisticated financial services across all 28 European Union member nations.

I don’t say this to write off Robinhood’s chances. Instead, I’m assuming the company will face some bitterly stiff competition upon launch.

Over the past six years, Robinhood has grown both in terms of users and features. It’s no longer recognizable as the share trading app it used to be. Now, it’s a vehicle for any form of mainstream investment you could care to make on the public markets, from shares and ETFs to options.

Although it faces challenges in the years ahead, particularly from resurgent legacy brokers who have embraced fee-free trading, I’m confident the company will continue to disrupt how retail investors grow their money.