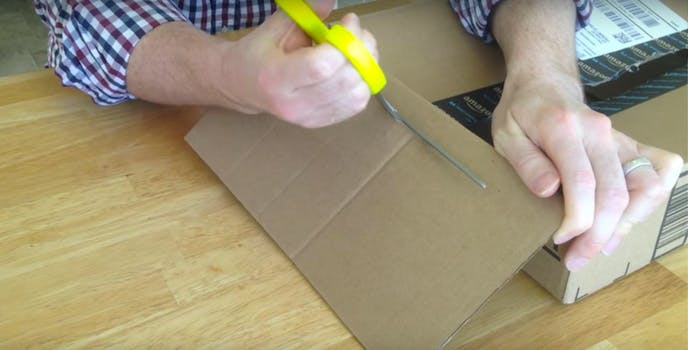 After thousands of years, someone finally built a better pair of scissors

Cutting against the grain.

Tech startups love to claim they’re “disrupting” industries that need change, but Shane Vermette is setting out to change something that hasn’t been given a update in several thousand years: scissors.

With Right Shears, Vermette is approaching shears at a new angle—specifically, a 90 degree one. Instead of the standard scissors design, Right Shears places the handle above the blades. The result, according to Vermette, is “massively improved ergonomics,” and he’s doing everything he can to spark an online movement aimed at replacing the paper-cutting tool currently residing in your drawer.

“I can’t even use a regular pair of scissors anymore without thinking how poor my hand configuration is and how uncomfortable it feels,” he told the Daily Dot. Comfort and improved control over the cutting process is easier on the hands.

Equally important, the reshaped scissors make it easier to keep hands out of the way of the cutting path, which makes it possible to cut in ways that other shears cant. Vermette said that angled scissors are capable of some of this, but have even worse ergonomics than standard scissors.The idea for Right Shears didn’t come from a decision that scissors were overdue for a change, despite being essentially the same since being invented in third century B.C. Egypt.

Vermette explained, “honestly I was just trying to solve a problem I was facing with a tool that I wanted to use.” In an effort to cut metal mesh to create a vent cover, it took Vermette and his father-in-law to cut through the material. “It did seem ridiculous,” he said, “and it was one of those moments where once the solution occurred to me I was like, ‘I have to build this.'”

Since unveiling his invention, Vermette has received messages from people interested in getting their hands on the tool. “I get messages from folks who can’t wait to use Right Shears because they have a father with arthritis, or they suffer from fibromyalgia and have a hard time with regular scissors,” he said. “I hope Right Shears can help them.”There’s one group who won’t get help from Right Shears—at least not right away. Lefties have long struggled with finding scissors that fit their grip, and unfortunately Right Shears will live up to the first part of its name when it comes to handedness.

Vermette said he understands the plight of the lefties, as he is one himself. “But since we are greatly outnumbered, I need to cater to all the righties out there for now,” he explained. While the handle on Right Shears is ambidextrous, the blade is geared to right hand dominant people.

Vermette said he had no issues learning how to use the shears with his right hand, so others will have to do the same for the time behind, until a left-handed version is available.

Before meeting the needs of the left-handed folks, Right Shears needs to be brought to market. Vermette said he’s working with manufacturers at the moment to make that happen, and once a commitment is secured, he’ll launch a crowdfunding campaign to make the shears a reality.

While he didn’t disclose a price or target date for availability, he did express hope that his product would be competitively priced with high-end scissors while offering a better solution.