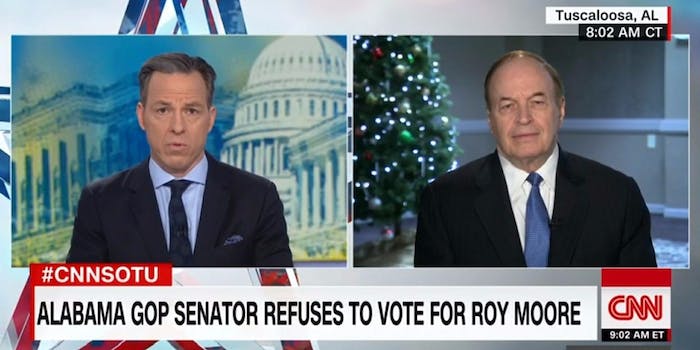 Senator Richard Shelby (R-Ala.) has already stated he won’t vote for Senate candidate Roy Moore in next week’s special election in Alabama and has called on him to drop out of the race. But on Sunday, Shelby, who has been in Congress for nearly 40 years, took a special opportunity to blast Moore even harder.

In an interview with CNN’s Jake Tapper on Sunday morning, Shelby said he believes the women who have said that Moore sexually assaulted or harassed them when they were minors. Shelby said that when he heard the story of Leigh Corfman, who said Moore sexually molested her when she was 14 years old, he decided he couldn’t vote for Moore.

Shelby told Tapper he’s already written in his vote for the special election that will occur Tuesday. And it was for neither Moore nor Democrat Doug Jones.

Apparently, voting for Jones was never an option for Shelby.

“I understand where the president is coming from,” Shelby said. “We would like to retain that seat in the U.S. Senate. But there’s a time—we call it a tipping point—with so many accusations, so many cuts, so many drip-drip-drips, when it got to the 14-year-old’s story, that was enough for me. I can’t vote for Roy Moore.”

Shelby also said, “I think the women are believable. I have no reason not to believe [them]. I wasn’t there. I don’t know what happened. But there’s a lot of stories there. [There’s] a lot of smoke—got to be some fire somewhere.”

Though most Republicans in the Senate have not taken the opportunity to disparage Moore, Arizona Sen. Jeff Flake tweeted a photo of the donation check he sent to Jones.