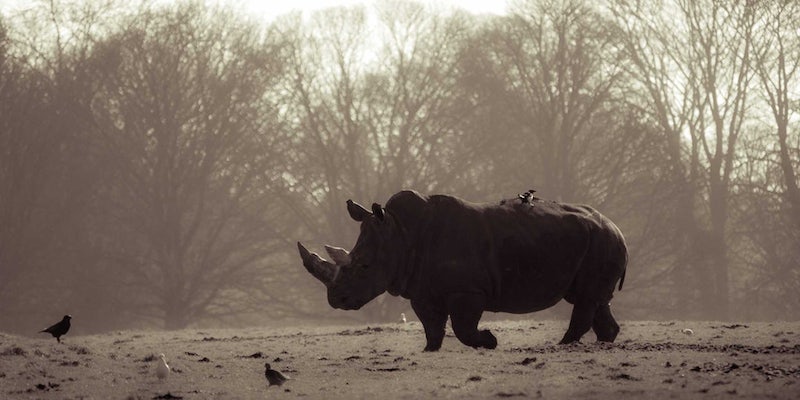 Hide the camera, save a life.

A sign of our times. Makes me sad! pic.twitter.com/PoEnwFSHgE

“Please be careful when sharing photos on social media. They can lead poachers to our rhino,” reads the sign. “Turn off geotag function and do not disclose where the photo was taken.”

De Wet did not respond to the Daily Dot’s requests for comment, but maintained in other conversations on Twitter that it was her photo, taken somewhere in South Africa.

Another Twitter user calling himself Dr. Neal Krawetz (a.k.a. @hackerfactor), a computer forensics expert at Aelius, claimed that the image was photoshopped.

@Resuna @lproven 100% fake. Text was added + kerning altered on “WHERE THE” to maintain border. @Eleni_dW: Where did you find this?

De Wet has not responded to Krawetz. But regardless of whether the photograph is faked, poachers using social media to track animals is a real problem, a fact that was confirmed to the Daily Dot by Joe Cloete, the Group General Manager of Shamwari Group, an organization that maintains several game preserves in South Africa.

In addition, Jeff Muntifering, a conservation biologist with the Save the Rhino Trust in Namibia, hadn’t ever heard of poachers using geotagged photos posted by tourists to track animals, but wrote that he wouldn’t be surprised if it happened. Poaching in Namibia is very low-tech, he told me. Most locals know where the rhinos are, more or less, and know how to find them; poachers will send a middleman to bribe a local to go shoot the rhinos and hack off the horn for them. Muntifering added:

One of the problems with fighting the poaching is that every single rhino population existing within its own unique environmental, social and political context.  Thus both the poaching and the strategies used to fight it are quite different.

“We do not allow guests to use cellphones on Safari, but cannot always control this,” Cloete wrote to me in an email delivered via a PR spokesperson. Indeed, De Wet herself uploaded a photograph of three rhinos to Instagram.

Image via William Warby/Twitter (CC BY 2.0)