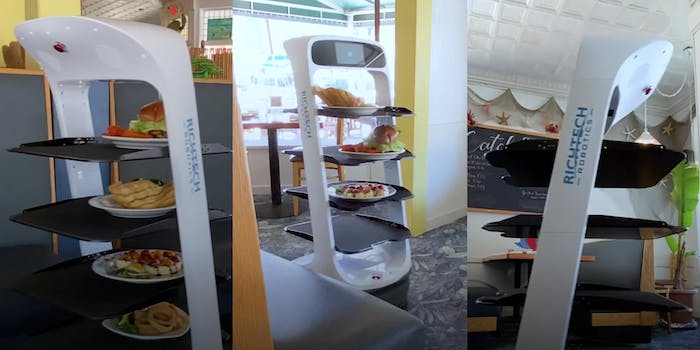 ‘They’ll hire a robot before they pay a human a living wage’: Restaurant hires robot server amid labor shortage

A restaurant says it purchased the robot due to a 'labor shortage.'

A restaurant in New Jersey is facing criticism on social media over its recent acquisition of a food-serving robot.

Detailed in a story from NJ.com on Wednesday, the robot is currently being used to bring customers their food at the Island Grill restaurant in Ocean City.

The owner of the restaurant, Andrew Yoa, says a labor shortage in the state is what ultimately led him to purchase “Peanut”—a robot developed by Richtech Robotics.

But users were quick to argue on Twitter that the ongoing labor shortage is due to poor wages, not a lack of workers.

“They were so unwilling to pay a live-able wage, that they went and got a robot,” @IAmDewman wrote.

Others agreed and likewise asserted that the restaurant could have just raised its wages in order to attract new employees.

“There is no labor shortage, there are only employers who would rather lease a robot than pay you a living wage,” @lottathose said.

Some users, however, applauded the decision and argued that it would keep them from having to tip employees.

“Hey I think this is great, as long as the prices of the meals don’t go up (they should actually go down),” one YouTuber commented. “Nice to not have to pay extra for tipping too.”

Still, the majority of users online appeared to push back, not so much at the robot but at the restaurant’s reasoning for purchasing it.

“They’ll hire a robot before they pay a human a living wage,” @MrChrisRockwell added.

Yoa claims, however, that Peanut is not taking anyone’s job and has defended his purchase.

“When things do go back to normal, the robot may not even be able to work in our situation,” he said. “Or maybe we just do one that just works strictly outside. There are lots of different things that we can do. But it’s definitely challenging.”

Discussions surrounding wages have intensified in recent months amid the ongoing coronavirus pandemic. An ice cream parlor in Pittsburgh recently made headlines after it said it received an overwhelming number of applications, after initially struggling to find workers, when it raised its opening wages from $7.25 to $15 pre hour.

The Daily Dot has reached out to Island Grill.