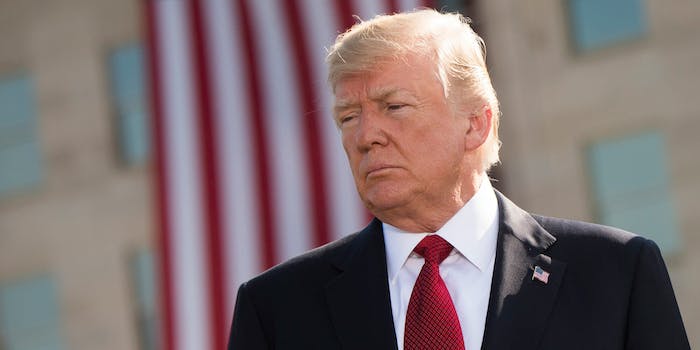 How Republicans are dancing around Trump’s racist tweets

They could just call them racist.

Over the weekend, President Donald Trump launched on one of the most racist diatribes of his presidency and demanded that four freshman congresswomen of color “go back” to their home countries if they’re unhappy with America.

The attack was widely condemned as racist. Still, people danced around labeling the president himself as racist because it seems like a bold accusation to throw at someone in the highest echelons of power (even though the president was attacking U.S. citizens specifically for their skin color, which is racist).

A great number of the president’s fans were ready to absolve him of accusations of racism, and their defenses went from the pedantic to the downright absurd. Take a look.

Fox News analyst Brit Hume decided that although Trump’s comments were xenophobic and nativist, they weren’t “racist” because they did not meet his “standard definition.”

Trump’s “go back” comments were nativist, xenophobic, counterfactul and politically stupid. But they simply do not meet the standard definition of racist, a word so recklessly flung around these days that its actual meaning is being lost.

Hume himself is not a dictionary, but many people online noted that the president didn’t tell someone like Rep. Joe Kennedy (D-Mass.), who is white, to go back to Ireland and do his job there before speaking out against the president.

Hume clarified his position in a second tweet, saying that because Trump didn’t declare the white race superior in his spree Sunday, it wasn’t racist.

For those who asked what is my standard definition of racism, here is an answer: Note definition 1. https://t.co/4kPRE3wDA7

Meanwhile, Rep. Andy Harris (R-Md.), who once brought white supremacist Chuck Johnson to his office, said that maybe Trump just meant the four should go back to their districts to fix them.

Maryland Congressman @RepAndyHarrisMD tells me President Trump's tweets this weekend were "clearly not racist" and that "he could have meant go back to the district they came from–to the neighborhood they came from." Full interview https://t.co/avXhiW2uBP

But Trump explicitly told the congresswomen to leave the U.S. to go back to their home countries.

Even better came the defense from a member of Trump’s 2020 campaign communications team, Matt Wolking, who insisted Trump never said “go back” because he also said “come back.”

Anyone who says the president told members of Congress to go back to where they came from is lying.

He told them to “Then come back and show us how it is done.” pic.twitter.com/7pmb0DNz1c

It is correct that Trump said “come back,” but that does not erase the fact that Trump first said to “go back.”

Even wilder is the line walked by conservative columnist Quin Hillyer, who said that while he does think Trump is racist, he doesn’t think those tweets were.

If you think that is an extremely weird hill to die on, you’d be right. But that what happens when you try to defend an explicitly racist string of invectives.