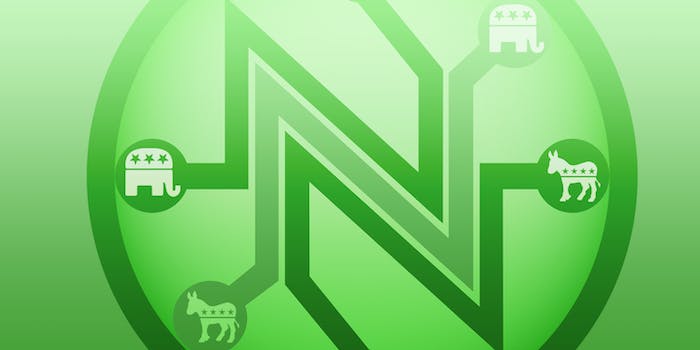 They do not want to live with the FCC's decision.

While net neutrality activists and telecom companies anxiously await the Federal Communications Commission‘s Feb. 26 vote on new net neutrality rules, Senate Republicans are planning to push back on what is expected to be a win for the Internet freedom movement.

The Senate Commerce Committee, chaired under the new Republican majority by Sen. John Thune (R-S.D.), is preparing a “compromise bill” to balance the concerns of industry and activists, according to the National Journal.

“We think a legislative route is a better way to go,” Chairman Thune told the press, “and we’ve developed some language that we think addresses a lot of the concerns that Democrats have raised, but does it without that heavy regulatory approach that they’re advocating.”

The Republican effort follows comments by FCC chairman Tom Wheeler at the Consumer Electronics Show in Las Vegas that emboldened net neutrality activists who saw hints of a favorable outcome. In an interview with Consumer Electronics Association president Gary Shapiro, Wheeler seemed to suggest that the commission’s late-February vote would result in Title II regulation of the Internet, turning it into a utility much like phones, water, and electricity.

“Chairman Wheeler appears to have heard the demands of the millions of Internet users who have called for real net neutrality protections,” Free Press president Craig Aaron said in response to Wheeler’s comments.

For Senate Republicans, nearly all of whom campaigned for office by opposing excessive government regulation, net neutrality—the principle that all data on the Internet be treated equally—is a technology policy issue with unusual political potency. The FCC’s long journey toward a net neutrality decision has earned it fierce coverage from conservative publications like National Review, Townhall, and Breitbart. As a result, net neutrality has become politicized in the same way as immigration reform and health care, and the conservative base wants Republican lawmakers to quash the FCC’s plan.

Conservative opposition to net neutrality exists despite the fact that the people most instrumental in designing the Internet, including World Wide Web creator Timothy Berners-Lee, have debunked opponents’ arguments. Technology publications have attempted to educate conservatives about the reality of net neutrality, but their message appears to have fallen on deaf ears.

This is the context in which Senate Republicans will push their bill to head off an ambitious FCC plan to protect the open Internet.

There are 54 Republicans, 44 Democrats, and 2 Democratic-leaning Independents in the Senate in the 114th Congress. To overcome a Democratic filibuster and pass a compromise bill, Republicans will need at least six Democrats to join them. Sen. Bill Nelson (D-Fla.), the Senate Commerce Committee’s ranking member, did not say how he planned to vote on Thune’s bill.

Meanwhile, the House Energy and Commerce Committee, led by Rep. Fred Upton (R-Mich.), is also seeking a legislative solution that “provides consumers the protections they deserve, the innovative choices they want, and the certainty that will ensure continued investment in the Internet,” according to a committee spokesman.