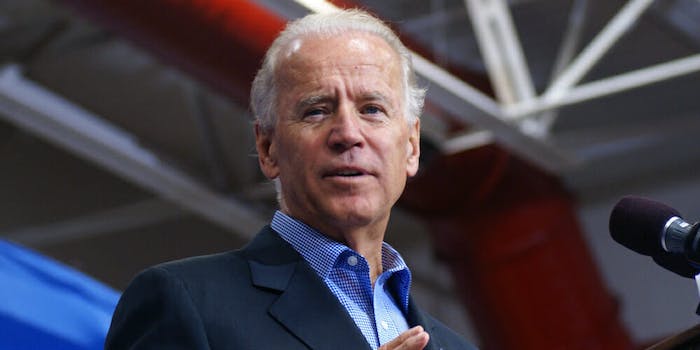 Since around April, “the most popular Joseph R. Biden Jr. website” has been a parody website rather than Biden’s own, real campaign site, according to the New York Times.

The parody site was created by 30-year-old Republican Patrick Mauldin, who also serves as a political consultant for President Donald Trump’s re-election campaign and makes videos and digital content for Trump.

“Uncle Joe is back and ready to take a hands-on approach to America’s problems!” the site’s trolling reads. “Joe Biden has a good feel for the American people.”

A portion of the site details “Joe’s legislative accomplishments,” including Biden’s vote to invade Iraq, his mass incarceration and reproductive rights legislative history, as well as his position on school busing in the ’70s: all not-so-progressive stances.

The latter recently resurfaced in the news cycle after Sen. Kamala Harris (D-Calif.) made a point to bring it up at the recent Democratic debate.

“You also worked with (those segregationist senators) to oppose busing,” Harris said to Biden at the debate. “And there was a little girl in California who was part of the second class to integrate her public schools and she was bused to school every day. And that little girl was me.”

Despite the level of trolling that would seem to make it blatantly obvious the page is a gag, some apparently still believe it’s the real deal. In April, Mauldin boasted in the now-quarantined r/The_Donald subreddit that people believed the website was Biden’s.

“How many Democrats can we red pill with my fake Joe Biden site?” Mauldin wrote in one post under the anonymous handle of NPC_12345.