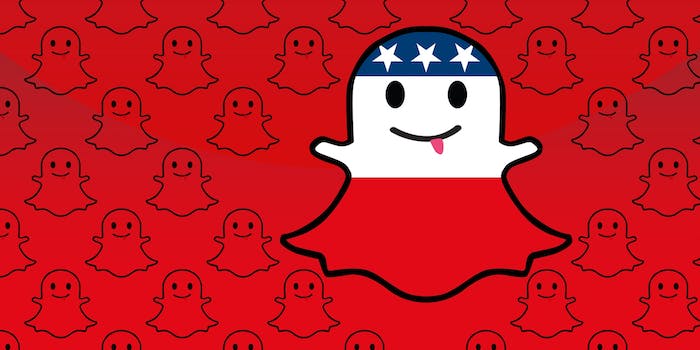 Why 2016 Republican candidates are flocking to Snapchat

The 2012 presidential election was dubbed the 'Twitter election.' Could 2016 be the year of Snapchat?

Former Texas governor Rick Perry had a big week last week: On Wednesday, he joined Snapchat. On Thursday, he announced his plan to run for president.

Sen. Marco Rubio (R-Fla.) also led his presidential bid by signing up for Snapchat. He tweeted, mere hours before he was expected to announce his run for the White House, that he had joined with the username marcorubio16, a not-so-subtle nod to his impending campaign.

I'm now on @Snapchat. My username is marcorubio16. Please add me.

The timing is no coincidence, of course. Increasingly, Republican 2016 presidential candidates are joining the ephemeral photo-messaging app as part of their digital campaign strategy. Once known as a way to send evaporating silly selfies and quickie sexts, Snapchat may seem an odd choice for those running for America’s highest office. Today, it is quickly becoming the next digital frontier for presidential politics.

So why are Republicans flocking to Snapchat while Democrats have largely kept their distance? More importantly, can it help them win?

Paul began using Snapchat long before any of the other contenders for the 2016 Republican presidential nomination. He joined up in January 2014, months before his work with Harris began, and has supposedly taken a shine to it.

“I know Senator Paul loves Snapchat,” Harris says. “He uses it himself.”

Back in March, Paul sang the service’s praises to Politico and explained why he finds the platform worth his time. “We reach thousands of kids that we might not ever have reached before,” Paul said. “In fact, we’re probably reaching some kids who aren’t yet 18, that will be 18 when the elections roll around the next time. We’ll have whole classrooms sometimes do a Snapchat to us.”

According to Zac Moffatt, cofounder of digital campaign firm Targeted Victory, Paul is simply ahead of the curve. Before long, he says, posting snaps will sweep across the campaign-trail spectrum.

“I feel confident saying that, by the end of the year, they’ll all be on Snapchat,” Moffatt says of the candidates racing to the White House. Moffatt ran the digital strategy for Mitt Romney’s ill-fated 2012 presidential bid. Snapchat was still in its infancy during that campaign season, but had it been a viable platform, Moffatt says, he would have advised Romney to use it.

“The challenge with managing any social media network is, do they have a large enough audience to justify the time?” Moffatt says. As of January of this year, the social network had at least 100 million users, and campaigns have taken notice. “Snapchat has emerged as a core technology,” he says. “It makes total sense as a broadcast tool to use for campaigns to get out there.”

“What’s cool about Snapchat is that it’s able to reach an audience that is sometimes unreachable.”

Fueling the enthusiasm is its user-base demographics, which skew younger than other social networks. A recent study by research firm ComScore showed that an astounding 71 percent of Snapchat’s users are between the highly coveted ages of 18 to 34. If Snapchat has 100 million users, there’s the potential for candidates to reach more than 70 million potential young voters, if used properly.

Of course, reaching these users does not mean they’re going to vote for you, particularly if you have an “R” next to your name. According to a Pew Research Center study released in April, 51 percent of respondents ages 18 to 33 identified as Democrats versus 35 percent who said they vote Republican.

The problem with young people, however, is that most of them don’t vote at all. Just 40.9 percent of eligible voters ages 18 to 29 cast a ballot in the 2012 presidential election, according to the United States Election Project, down from 48.4 percent in 2008. Since at least 1986, the under-30 crowd has turned out in fewer numbers than any other demographic.

Then again, if you want to be optimistic about it, you can also see young people the largest untapped keg of voters in the U.S.

“What’s cool about Snapchat is that it’s able to reach an audience that is sometimes unreachable,” says Danielle Kantor, communications strategist and creative lead at Internet-strategy firm Blue State Digital. Kantor’s company primarily works with politicians who lean left of center. So far, however, none of the Democratic front runners have signed up to snap with their constituents.

“It has to feel like the type of content that people like to consume on Snapchat, with a personal point of view,” says Julia Smekalina, head of political clients and digital strategy at Virginia-based digital agency IMGE. “It can’t be pre-canned.” 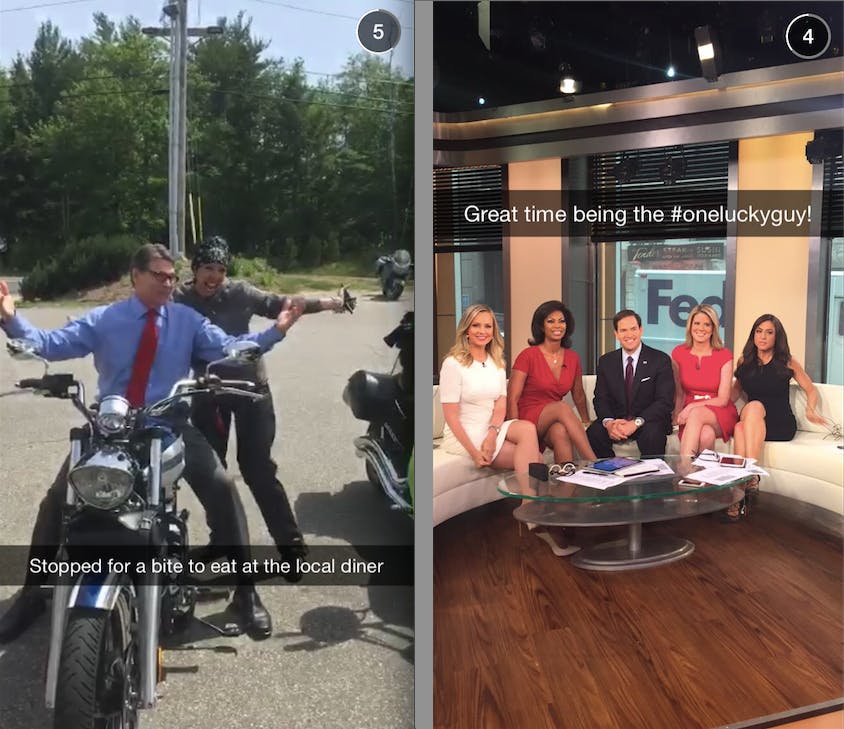 “Republicans, in general, have a tougher time connecting to a young audience on a one-on-one basis,” Kantor says. “I think it’s a big shift for them to think about transparency and connecting with their audience.”

The idea that candidates must be authentic and genuine is a common thread between all the politics-focused digital experts we spoke to, in part because Republican candidates have struggled with coming across as more human than politician.

“I’m wary of candidates who just use it [social media] for show,” Brian Donahue, CEO and founder of CRAFT, a digital agency working with right-of-center political action committees. “People are looking for candidates who are willing to go out from behind the wall and act as real people and speak to younger voters in a real way.”

Adding to the draw of Snapchat is the company’s move to substantive content, led by Peter Hamby. A CNN veteran widely considered one of the best political reporters in Washington, Hamby joined Snapchat as Head of News in April. While it is unclear whether Hamby is directly involved in the GOP’s newfound love for Snapchat, his reputation for fairness toward politicians on both sides of the aisle may serve as a sign to Republicans that the social network is neutral territory.

Thus far, the candidates are mostly using Snapchat by posting “stories.” These are slightly less ephemeral than a one-to-one message and remain visible to anyone who’s friends with the user for 24 hours rather than mere seconds. To view a story, you must hold down your finger during the duration of the story, a feature Smekalina says gives candidates precious added interaction with their followers.

“For users to engage with content, they have to keep their finger down,” she says. “It’s not a passive experience.”

“Snapchat could be the best way to reach the just-18, fresh voter.”

So what’s the next step after casual snaps of TV appearances and town hall rallies? Advertising, of course. Back in May, Snapchat announced the hiring of Google’s head of political ad sales, Rob Saliterman.

Harris seems eager to test out this new approach to ads with his candidate, Sen. Paul. “Snapchat could be the best way to reach the just-18, fresh voter,” he says.

Moffatt, on the other hand, is wary of putting too much stock in this strategy. “I think it will be an effective strategy, as long as it’s complementary” to TV ads and other types of outreach, he says.

The major factor that will decide whether or not the campaigns put time and money behind packaging ads specifically for Snapchat is whether it can accurately target the users candidates want to reach—a key factor that remains a major unknown for campaigns.

An Ad Age story from the middle of May questioned whether Snapchat would be able to fine-tune their targeting service.

To date, Snapchat has held back from letting advertisers aim their ads based on its users’ information like age and gender. However the company has been working on letting advertisers only show ads to people that are of a certain age, according to people familiar with the matter. This so-called “age-gating” is primarily intended for alcoholic beverage brands to ensure they only advertise to drinking-age audiences. It’s unclear whether this age-gating could be applied to people who use Snapchat and would be at least 18 years by Election Day 2016. The spokeswoman declined to comment on any plans to allow age-gating for ads.

There is still little information about Snapchat’s political ad capabilities, and the company did not respond to our request for comment on its targeting tools, but Saliterman’s hire last month signals a movement towards something big.

“I think the Democratic candidates will get into it when it feels right,” Kantor says. “It’s still a channel that’s worth paying attention to. But it’s still like, why force it when it’s not necessary? It sort of feels like [the Republicans are] jumping on because they quote unquote have to.”

Regardless of whether or not 2016’s Republican contenders feel entire comfortable this relatively new, relaxed, off-the-cuff platform, Donahue thinks they need to at least give it a shot.

The Republican candidates “have an opportunity to take advantage of the way media is being consumed now,” Donahue says. “If they decide they don’t want to, it will be to their detriment.”