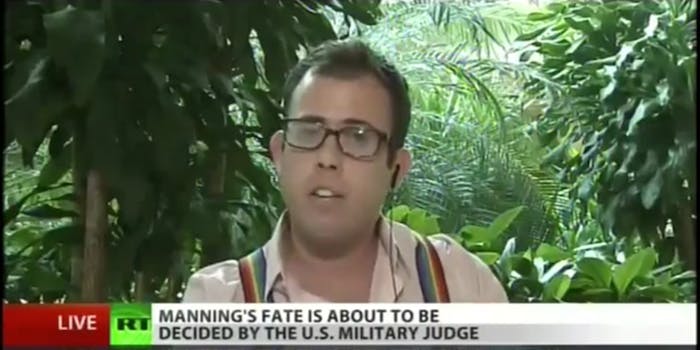 “You have 24 hours a day to lie about America,” Jamie Kirchick said. “I am going to tell the truth with my two minutes."

Reporter and columnist Jamie Kirchick was invited on Internet news channel RT this morning to discuss the then-pending sentencing of Bradley Manning. RT is the Russian-funded English-language video channel, and he was appearing live via satellite from Stockholm.

Instead, Kirchick took his allotted two minutes of airtime and denounced Russia’s anti-LGBT laws. He sported “gay pride” suspenders and took the network to task for not talking about President Vladimir Putin’s “horrific anti-gay legislation,” which has essentially become government-sponsored homophobia.

As the newscasters attempted to lasso him back into the Manning discussion, he said, “RT has been Bradley Manning and Edward Snowden 24-7. I haven’t seen anything on your network about the anti-gay laws that have been passed in Russia.

“You have 24 hours a day to lie about America,” he added. “I am going to tell the truth with my two minutes.”

He then disappeared from the split screen.

True fact: @RT_com just called taxi company that took me to studio to drop me off on the side of the highway on way to Stockholm airport