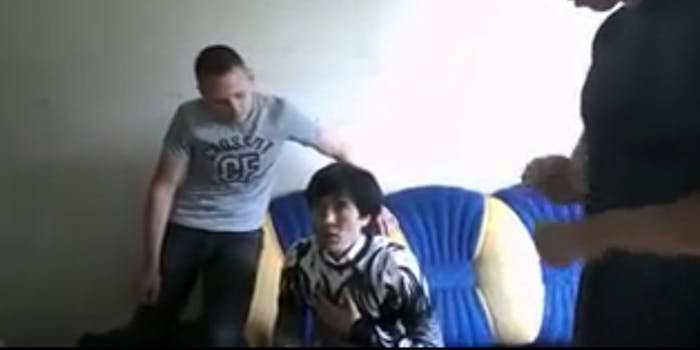 A young Muslim immigrant from Uzbek is believed to have died as a result of his injuries at the hands of extremists.

A couple of weeks ago, we reported on a growing number of neo-Nazi extremists who are using the Russian social media site VK to target and harass LGBT youths. Two anti-gay VK groups, Occupy Pedophilia and Occupy Kamensky, use fake profiles to draw young men into public spaces, where they are then photographed and videotaped. Further, they are often bullied, beaten, or doused with urine, and then their ordeal is uploaded for all to see.

An image posted to the group Occupy Pedophilia, which is led by former skinhead Maxim Martsinkevich, showed an unidentified man kneeling between two group members, holding what looks to be a sex toy, while the men pull his hair and offer some variation of a “thumbs up.” It’s now being reported that young man, a Muslim immigrant from Uzbek, has died as a result of his injuries at the hands of extremists. This video, uploaded by the Gaily Grind, shows the beginning of his torture. Warning: It is not easy to watch.

Russian activist Dr. Valentin Degtyarev relates that the men responsible are still at large, since the police largely condone this type of activity. Degtyarev attempted to alert authorities to these abuses, but received death threats in return. Other activists who have spoken out against the extremists have been kidnapped, and the torture of suspected “pedophiles” continues to happen in broad daylight. Victims of the VK hate groups often commit suicide after being publicly outed.

His death follows the murder of a 23-year-old gay man in Volgograd in May.