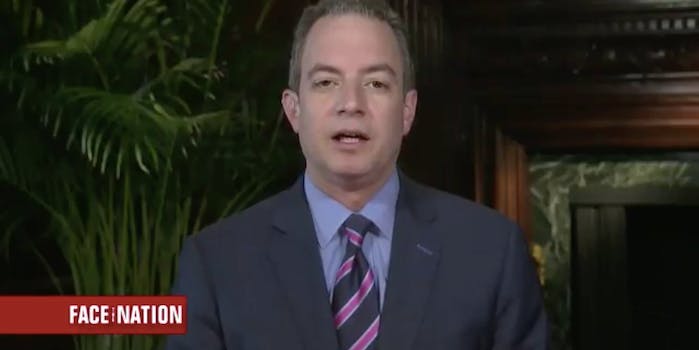 The White House is not changing its stance.

When, on Friday night, President Donald Trump took to Twitter to declare the press who report on him the enemy of the American people, it was clear that would be the topic of discussion on the Sunday circuit.

Less clear was who the administration would put in front of the camera.

Several members of his inner circle have had less-than-stellar media appearances of late, so Trump chose perhaps his most professional counselor, chief of staff Reince Priebus.

On Face the Nation, Priebus was asked point blank if he agreed with Trump’s sentiment. When pressed on the “enemy” wording, Priebus doubled down.

When Trump calls the media “the enemy,” should we take him seriously?

Priebus declared Trump’s administration to be somehow completely different from all others, and thus deserving of better coverage.

Later in the morning, Priebus took to Chuck Todd’s Meet the Press, where they began by addressing Mike Flynn’s resignation.

He also took a slightly different tact when asked about Trump’s media tweets, saying that Trump does support the First Amendment, but that—and the wording here is interesting—some things in the media are bad and Trump categorizes that as “fake news.”