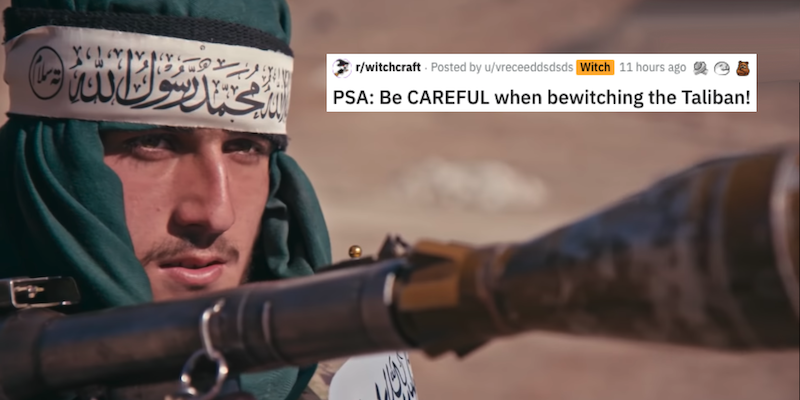 Witches are trying to organize a ‘mass hexing’ against the Taliban

Some fear that the Taliban could respond with 'incantations and rituals' of their own.

A popular subreddit dedicated to witchcraft is currently debating whether it would be useful to carry out a mass-hexing against the Taliban.

Following the militant group’s swift takeover of Afghanistan this week, self-described witches on Reddit’s r/witchcraft forum began concocting plans to battle the Taliban with the use of “magick.”

In a post to the subreddit’s more than 254,000 members on Monday, one user attempted to rally all available witches to take on the militant group.

“I’m looking to organize a max heading [sic] of the Taliban forces in Afghanistan right now,” the user wrote. “Nothing has been put together yet and I’m looking for people who are wiser than I in this sorts of magick. I just want as many forces as possible working against them as we can muster up.”

The post quickly led to widespread debate over the usefulness of such a venture, with one user warning in a separate post that the Taliban could respond with “incantations and rituals of their own.”

“The Taliban as horrible as they have shown themselves to be, are very spiritually aware and they routinely take steps to dispel, ward off and weaken magick. They have incantations and rituals of their own which can at the very least neutralize us – at worst can cause damage to our spirtual [sic] selves (perhaps through some sort of hex blowback).”

The second user appeared to further argue that spells from Westerners may fall short given the magical history of Asian cultures, which could deflect even the most “complex and time-consuming rituals.”

“I find bewitching evil movements very spiritually draining and I’ve gotten sick due to blowback on occasions – I just want y’all to be careful as these people are not exactly normies when it comes witchcraft,” the user adds.

Others even claimed that a mass-hexing could result in catastrophe, suggesting that the group’s last mass-hex led to the coronavirus pandemic.

“Last time y’all wanted a mass hex we got a pandemic,” one user wrote.

Overall, the campaign does not appear to be that popular. A subreddit dedicated to the effort at r/BetwitchTheTaliban has only garnered 114 members as of Wednesday afternoon. A Discord channel has also been set up to prepare witches for the planned hexing.