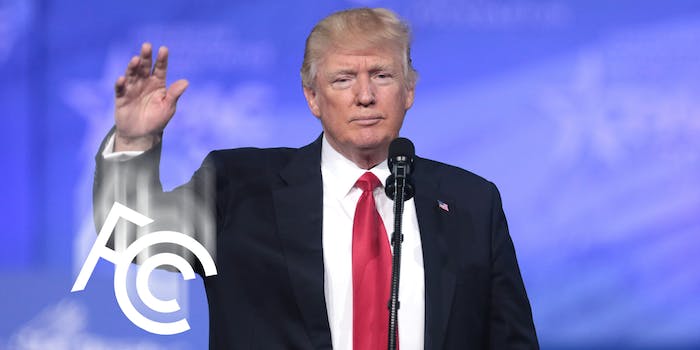 Trump's most enthusiastic supporters are breaking with the president over privacy.

President Donald Trump is sitting on a political landmine, and it’s already turning off die-hard supporters.

Members of Reddit‘s r/The_Donald—a community known for its exaggerated support for all things Trump—is tearing at the seams over the president’s support for legislation that kills Federal Communications Commission privacy rules that would have prevented internet providers from selling a vast array of personal information.

House Republicans passed the measure on Tuesday after the Senate’s passage of the resolution last week. The measure now heads to Trump’s desk for his signature, and he is expected to sign it.

The House’s passage of the resolution, known as S.J. Res. 34, sparked backlash among some Trump supporters on r/The_Donald, where taking positions that contradict the Trump administration is extraordinarily rare.

The Donald Subreddit are losing their minds over Congress stripping away FCC privacy regulations pic.twitter.com/xLZrsvH5r6

In a top post published on Wednesday, one of r/The_Donald’s moderators, shadowman3001, aimed to bring order to the debate, stating clearly the arguments for and against the legislation, as well as his own take.

Prefacing the argument by saying, “I would have no issue with a bill to prevent all companies, ISP and websites, from collecting your data,” shadowman3001 says killing the FCC rules for internet providers is only fair considering that web companies like Google, Facebook, and countless other sites and apps are allowed to collect user data. “In my humble opinion, the government shouldn’t allow some companies access to your data, while restricting other companies access to that same data,” he wrote.

Responses to shadowman3001’s post run the full spectrum, but the most popular comments echo the moderator. “I am against anything and anyone that can track and sell my internet browser history,” reads one popular comment. Another commenter adds, “It makes me uncomfortable.”

“It’s taking us in the wrong direction,” writes one user in a popular comment. “We should be limiting the kind of data, not just saying ‘Hey those apps get more data then I doooo Not fair!’ Then say here you go Comcast, Verizon, and other companies that have been known to screw us over all the time. We’re going to give you power over us even more.”

While there is evidence that Trump or his staff pay attention to activity on r/The_Donald—the president has shared photos on Twitter after they became popular on the Reddit community—it is unclear whether anyone in the White House is listening to the concerns of Trump’s most ardent supporters. While it is unlikely he will reject the bill altogether, there is a glimmer of hope that he’ll move to make some changes.