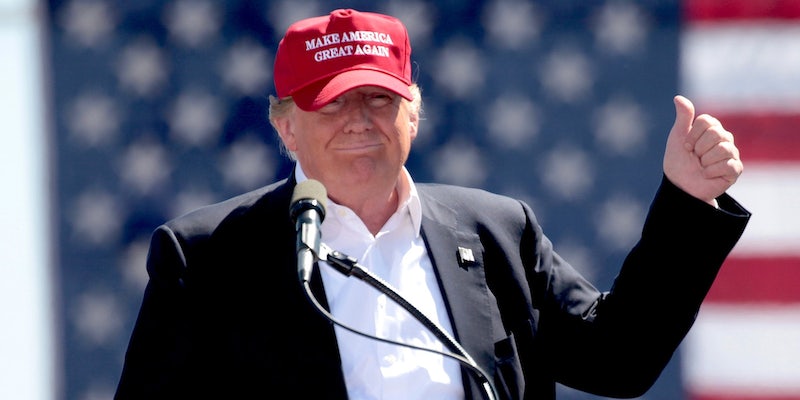 A Reddit war between r/Sweden and r/The_Donald erupted and enveloped the entire site.

In probably one of the most bizarre Reddit feuds to ever occur, r/Sweden and r/The_Donald went to war, enveloping the entire site and turning it into a war zone.

For the past few months, the front page of Reddit has been inundated with posts from r/SandersforPresident and r/The_Donald, a subreddit dedicated to Donald Trump’s presidential campaign. The deluge of content from both subreddits had admittedly become annoying. The former often linked to articles critical of Hillary Clinton or attempted to rally redditors into donating to Sanders while the latter would be far more vulgar and vitriolic.

Much like Trump himself, r/The_Donald was not afraid to hurl insults at others. With incredible boorishness and little regard for civility, the subreddit would constantly go after Muslims and Ted Cruz, often comparing both to rats or disease. The subreddit took offense to any countries sympathetic to Syrian refugees, often insulting their intelligence. r/The_Donald would make sure that any story potentially painting Syrians or Muslims in a negative light would reach the front page—all in the hopes of convincing other redditors that Muslims were incapable of integrating with the Western world.

Much of Reddit viewed r/The_Donald the same way that it views 4chan, the infamous anonymous online image board. Considering how loud both would tend to get, it proved better to not engage.

That was until r/The_Donald insulted Sweden. 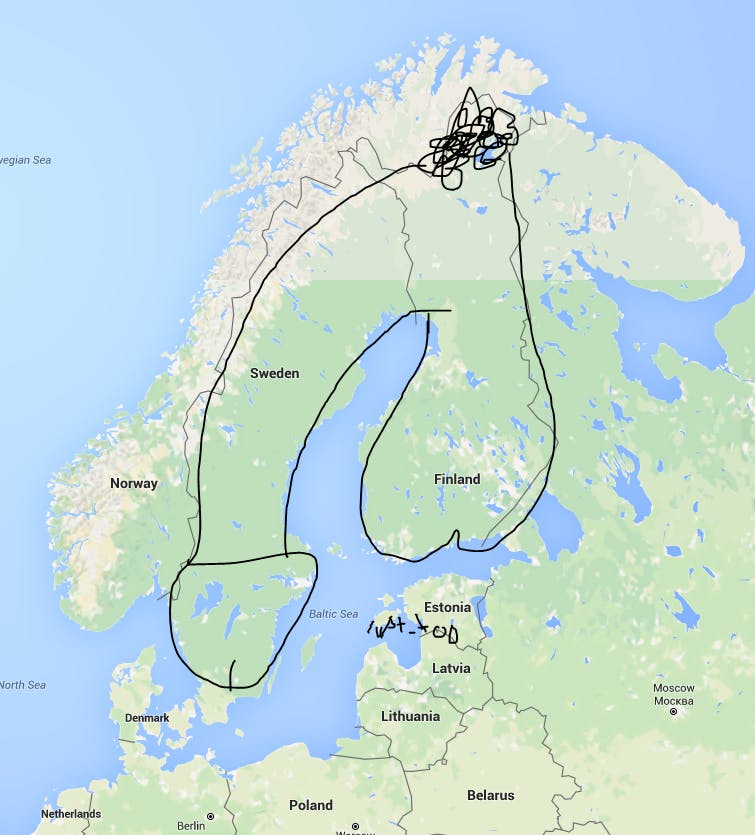 According to user TheRealJasonsson on r/SubredditDrama, the image above comparing Finland and Sweden to a penis was enough to ignite the conflict. It should be noted that in the original post, the artist referred to Sweden as “Swedistan,” a jab at Sweden’s growing migrant population.

Once r/Sweden found out about the post, it then retaliated by comparing America and its relative location to Canada to a gay tryst. 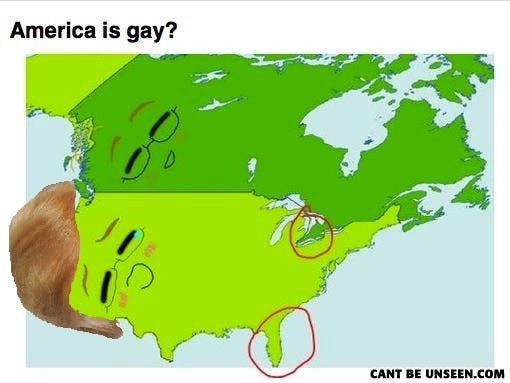 Yes, this vulgarity on both camps was nothing to be proud of, but users of r/Sweden, or Swedditors, quickly redirected their attacks toward Trump. 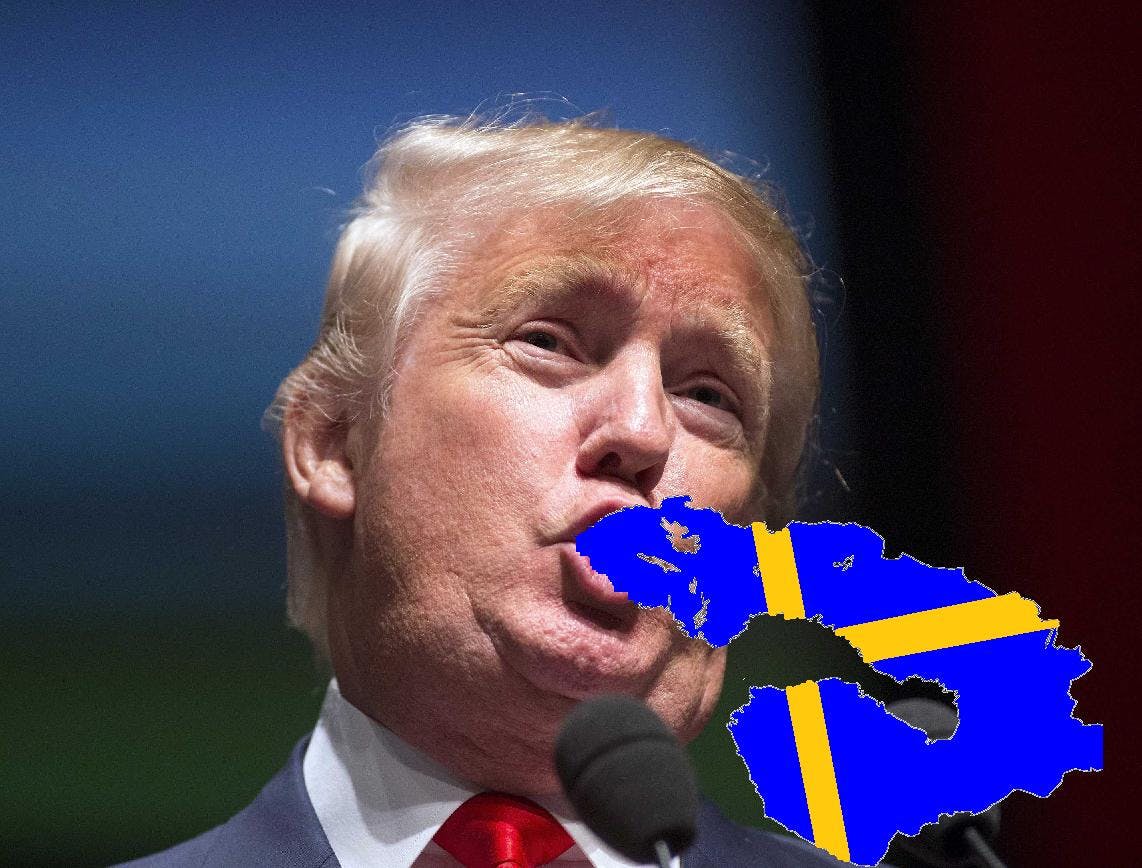 A common theme amongst both subreddits’ insults were homosexuality as well as an odd sexual fetishization that users on r/The_Donald had co-opted to insult Cruz. The group referred to internally as Centipedes had created their own nickname for the Texas senator. They would often refer to Cruz as a “cuck,” a term used to describe someone who gains pleasure from seeing his or her spouse engage in sexual relations with another person.

Swedditors interpreted r/The_Donald’s obsession with cuckoldry as latent sexual insecurity and suppressed homosexual aspirations. As one Swedditor put it:

USA – The land of the cucks.

All they really want is a “strong” leader who tells them what to do.

They love the sub-servitude. Love being slaves.

Again, considering how caustic r/The_Donald could become with anyone who disagreed, most on Reddit chose not to engage. But r/Sweden had become the outlet that other redditors had been seeking, almost acting as a voice of the silent majority. As more memes were being created to insult Trump, users quickly upvoted them to the top of the site. 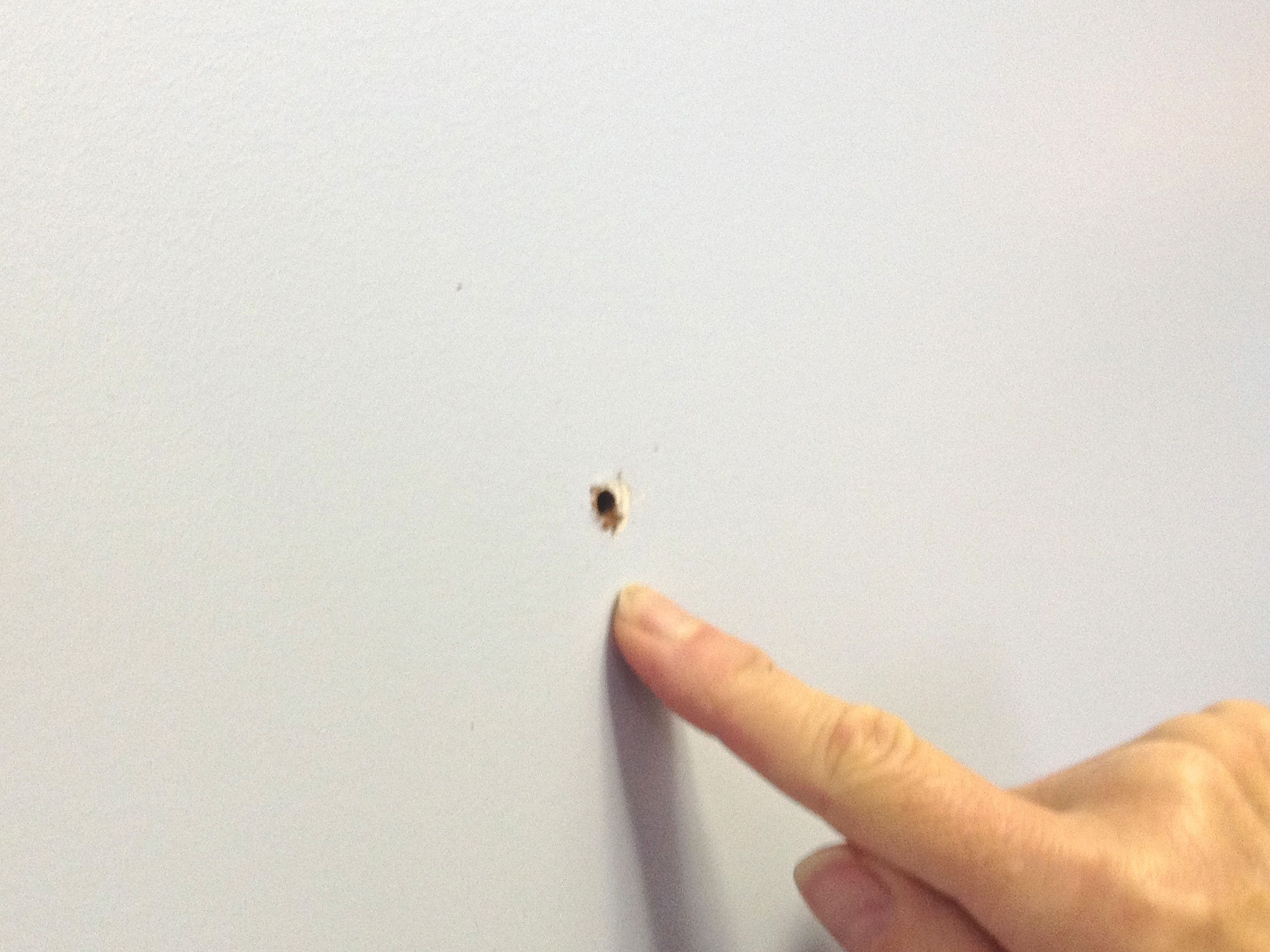 That’s when the Centipedes took off their gloves. To them, everything was fair game.

The Centipedes were properly upset, taking to their subreddit to pen caustic screeds, including a post titled “in order to properly educate r/Sweden about who exactly they are letting fuck their wives (and their goats), our ‘no racism’ rule will no longer be enforced at all with regards to the Middle East.” They even unbanned members from r/European so that they too could learn and engage from the ongoing discourse. 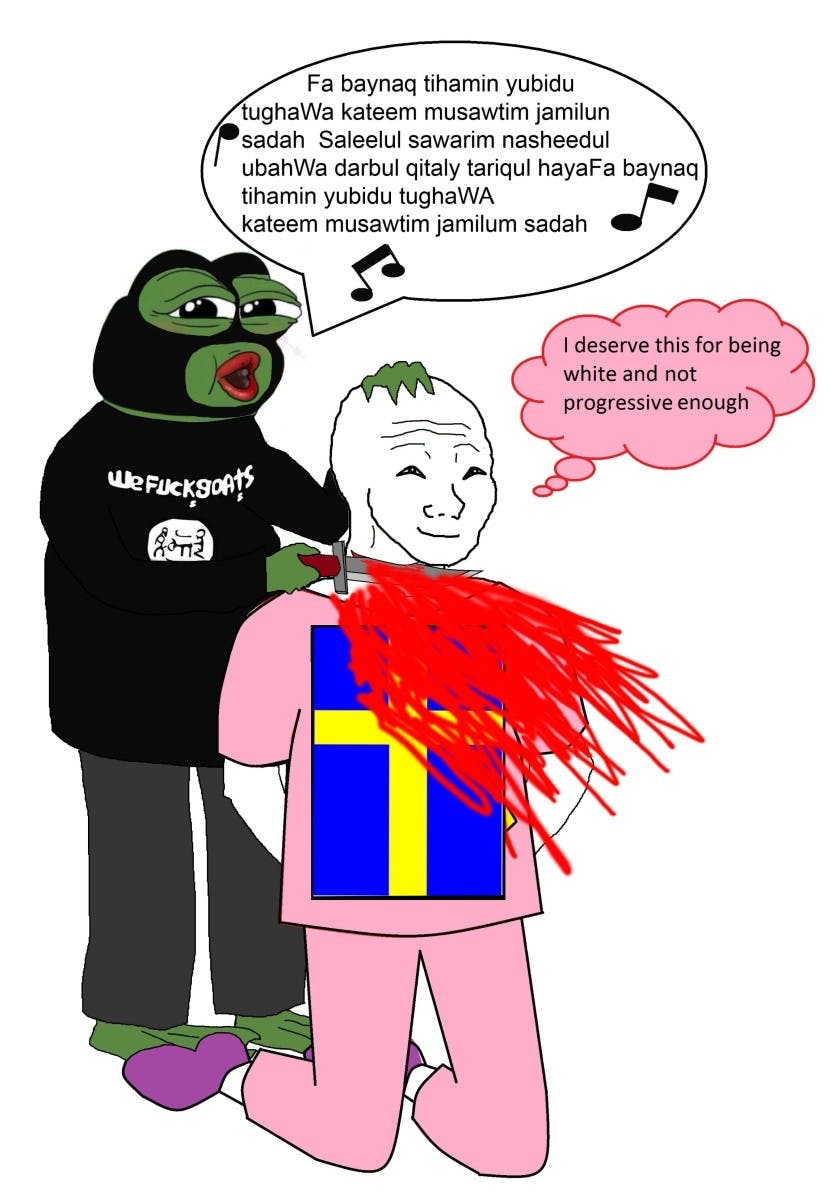 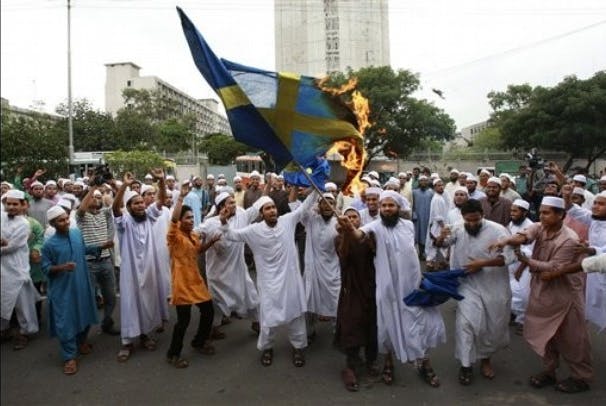 Beyond just images and memes, articles were also being shared by Trump supporters pushing the idea that Sweden was damning itself to the whims of innately violent refugees.

Muslims and Islam had been fair game within r/The_Donald because criticism wasn’t deemed racist, the subreddit’s rationale being that Islam is a religion and not a race, meaning that insults or negative indictments were fair game. This thought did not extend to Jews, however. The wording of the post above calls that into question, and points to clear hypocrisies. It was something not lost amongst Centipedes. Many of them quickly called foul to the new ruling, claiming that it would only arm liberals against them.

But as r/The_Donald upvoted their own stories to keep the group on to the front page, r/Sweden also continued to upvote its deluge of pictures and memes. One such post even amassed over 4,000 upvotes in favor of r/Sweden, showing where allegiances fell amongst Reddit at large. 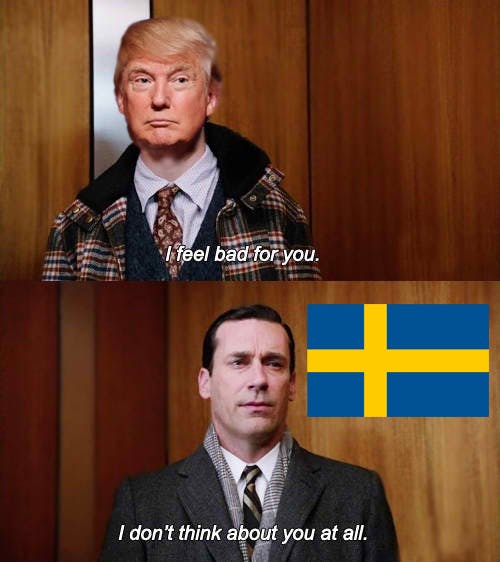 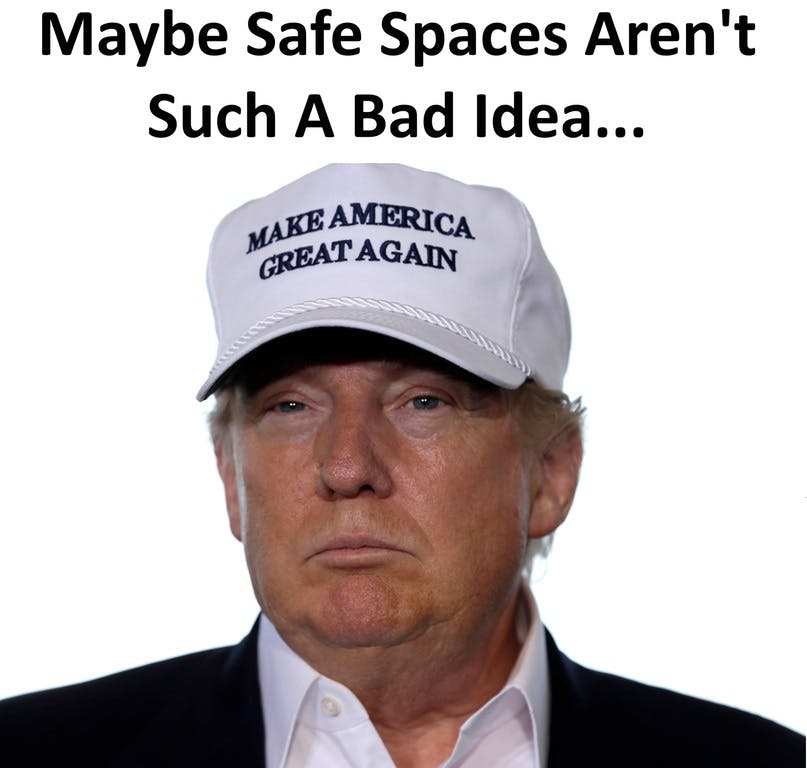 Unsurprisingly, the greater Reddit community was quite appreciative, responding with their own series of memes and GIFs. 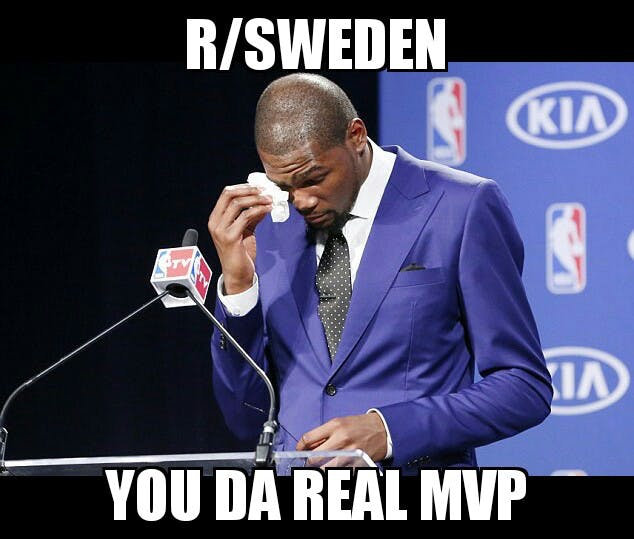 r/Sweden continued its onslaught of Trump attacks, but may have taken it too far for many Americans by bringing 9/11 into the mix. A since-deleted post showed the Twin Towers being destroyed with a crying Trump. But, as with anything on the Internet, once it’s up, it’s up forever.

The post was also edited to subvert the destruction of the Twin Towers.

That’s when the mods of r/Sweden stepped in with a post telling Swedditors to calm down. They compelled its users to display kindness in light of all the drama while also vowing not to allow certain ideologies to insult Sweden’s progressive values. That’s also when the mods announced that they would be shutting the subreddit down for the night and would allow the sub to resume as normal in the morning.

While posts from r/The_Donald continued to trickle into early Friday, for the most part the war had subsided.

As for who won, it all depends on who you ask. Of course, Centipedes felt that they had won by way of pushing articles to the front about inter-migrant violence or cases of assault while Swedditors continued with their fuktiga mejmejs (dank memes) that Centipedes felt fell flat. Also, r/Sweden shutting down for the night was interpreted as a concession.

No matter the Centipedes’ interpretation, Swedes, including Minecraft creator Markus “Notch” Persson, were proud of their fellow countrymen and women.

I'm so proud of my fellow swedes over at /r/sweden/ right now.

The rest of Reddit also seemed to side with r/Sweden, as shown by the massive influx of upvotes as well as the results of a straw poll. 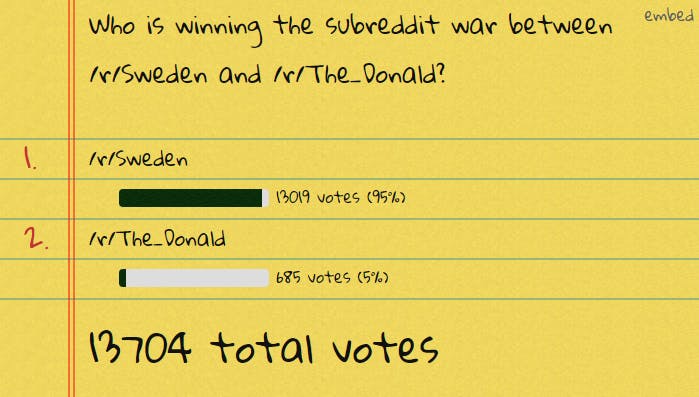 Mods from r/Sweden also put out a statement on what it called The Borkening. They noted that the massive increase in traffic that the subreddit received was all thanks to their content.

The sub received 50 times more comments and 10 times more submissions and reports. But by the end of it, only low-level content was being submitted and r/The_Donald had stopped countering with its own. It was time to call it a night.

This election cycle has been unlike any other. It has pulled in everyone, from the apathetic to non-Americans alike. But when ultranationalist Trump supporters decided to go after the affairs of another country, that target chose to retaliate in its own dry and humorous way.

For Americans at home, it gave a bit of a reprieve from having to constantly battle and argue and allowed us to sit back and feel like the rest of the world, looking into our often times ridiculous political system. Considering the crassness of r/The_Donald, it’s only a matter of time before it insults another group and a second Reddit war erupts.