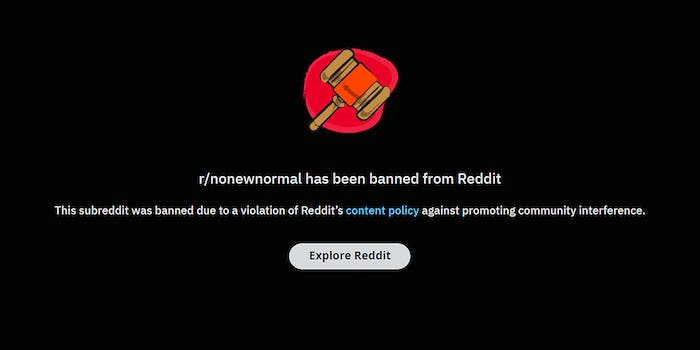 Some subreddits are satisfied; others want more demands met.

Reddit has given in to some of the demands of a massive campaign asking it to remove COVID-19 disinformation from the platform.

Last week, the Daily Dot reported that hundreds of subreddits had issued a public plea for Reddit to do more to police COVID disinformation. Ultimately, more than 1,000 reposted the plea originally posted by VaxxHappened.

Reddit refused to take action. “Reddit is a place for open and authentic discussion and debate,” CEO Steve Huffman, aka spez, wrote in a statement. “…Given the rapid state of change, we believe it is best to enable communities to engage in debate and dissent, and for us to link to the CDC wherever appropriate.”

In response, dozens of subreddits went private in protest earlier this week. According to a list compiled by one redditor, roughly another 150 were going to set their subs to private on Thursday. Setting a subreddit to private restricts public access to it and can decrease overall traffic to the site.

Some of the subs that were to participate in the blackout have millions of members.

Today, Reddit announced that it was giving in to some of their demands. It’s banned the NoNewNormal subreddit, which was specifically referenced in calls to police pandemic disinformation. It’s also quarantined 54 others, including Ivermectin, vaccinelonghaulers, CovidIsAFraud, Wuhan_Flu, TrueAntiVaccination, and Covid Vaccinated Uncut.

Quarantining a subreddit means it doesn’t show up in public searches and doesn’t generate revenue. People who visit these subs are greeted with a notice that includes a link to a Centers for Disease Control and Prevention website about COVID.

“…[W]e never claim to be perfect at these things but our goal is to constantly evolve,” Reddit said in a lengthy statement. The statement included its analysis of the prevalence of COVID disinformation and some clarifications about its rules.

Reddit also announced that it will develop a new reporting feature for moderators.

“[The feature will] allow them to better provide us signal when they see community interference,” the platform said in a lengthy statement. “It will take us a few days to get this built, and we will subsequently evaluate the usefulness of this feature.”

This feature is intended to enable moderators who suspect their sub is being brigaded to report it to Reddit. “Brigading” is Reddit-speak for flooding a sub whose content one objects to with mockery, downvotes, and more.

Some campaigners are satisfied. This afternoon, moderators of some participating subreddits took a vote on Discord about whether to continue with plans to go private tomorrow. Thus far, a majority have voted to discontinue plans for a blackout.

Following its announcement, some thanked Reddit for meeting their demands and clarifying its policies concerning false information about health.

The mood was optimistic on Discord. “Around a month ago I started this and haven’t regretted it at all,” said a primary organizer. “…I’m very happy with what we could accomplish.”

Others aren’t giving up yet.

On Discord, another of the organizers told the Daily Dot that Reddit may not have seen the last of this campaign.

“Some of us are satisfied that Reddit has banned r/NoNewNormal and made a statement about misinformation surrounding the entire website.”

“On the opposite end of the spectrum, some [think] the actions taken weren’t enough, and would like to ban each and every subreddit which constantly spreads this disinformation such as downplaying the pandemic and encouraging ingestion of harmful drugs, which includes r/conspiracy, r/ivermectin, and r/lockdownskepticism.”