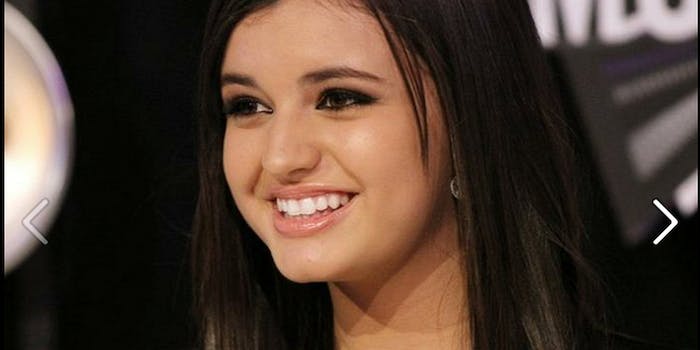 Rebecca Black may have finally found something more controversial than her hit song “Friday:” her political views.

The 14-year-old singer threw her support behind Institutional Revolutionary Party (PRI) presidential candidate Enrique Peña Nieto in a video posted Monday on YouTube. Black, who’s mother is Mexican, endorsed Nieto while on a trip to the country.

“I believe that Peña Nieto is going to do a fantastic job,” Black said in the video, while her mother translated to Spanish.

In the jumpy and apparently hastily edited three minute clip, Black said that kids her age should not be ignorant of politics, even if they aren’t yet eligible to vote.

“Even though I’m only 14 and I won’t be able to vote in my country for four years, you don’t want to be 18 and not know anything about what you’re going to vote about,” said Black to the roomful of young Nieto supporters.

Her support drew criticism, as many Mexicans are marching in the thousands to criticize his party for manipulating the country’s mainstream media. The singer’s endorsement video racked up 27,000 views and numerous dislikes with anti-PRI and anti-Black comments.

“Given how disliked Pena﻿ Nieto is by a huge segment of Mexico’s population and how much Mexicans dislike non-Mexicans; Pena Nieto and Ms. Black are opening themselves up to massive ridicule,” a commenter wrote.

Popular Mexican YouTube host Astrid Capon also came out swinging against Black, saying she was insulted that Black, a non-Mexican, would advocate for a presidential candidate. Capon added she believed Nieto is just using Black, taking advantage of the young singer’s ignorance and popularity for his own political gain.

Capon also pointed out that Black’s uncle is a city councilman for the PRI in Cuernavaca.

Oddly, it now appears that, for many Mexicans, Black’s political views may be worse than her singing.